If you are a regular reader of the UK comic 2000ad you'll have no doubt been mesmerised by the amazing work of artist Leigh Gallagher. Not only is Leigh probably the sexiest guy working in the comic industry (he has a swooning lady per 10 square metre ratio) he's also an extremely nice guy. So when Scotch Corner contacted him and insisted that he endorse our humble blog he was more than happy to comply.

Leigh also wrote as a message and for legal reasons we have to mention that some portions of the following statement are purely the thoughts and opinions of Leigh Gallagher and in no way represents the views held by Scotch Corner (especially the last bit). 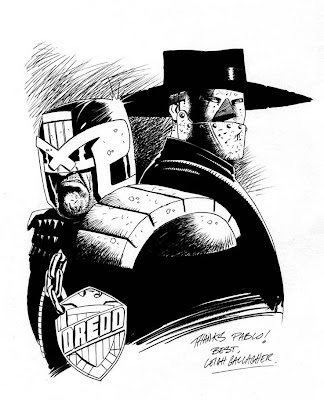 Hi, my name's Leigh Gallagher. When I'm not standing around looking dreamy, I like to look dreamy whilst drawing comic books.

I've worked on a variety of projects for DC Comics, most notably Justice League Unlimited and the toy based comic, Lego Bionicle, of which I was the artist throughout 2008. For the last 3 years I've been illustrating Defoe for 2000AD--a 17th century zombie hunter written by 2000AD's daddy, Pat Mills. It's a dream job for me, as I now use a style inspired by my early love for 1980's black and white comic strips like Scream, Eagle, and of course 2000AD.

Book 3 of Defoe is currently running in 2000AD, with the graphic novel (Defoe 1666) collecting the first two books together, is out August 15th! Write it on your forehead so you won't forget!

You can find me being generally dreamy and my work on my bloggy at http://leighgallagherart.blogspot.com/

The attached picture is a drawing I did for a nice chap who emailed me out the blue all the way from Mexico a year or so ago. He asked for either Defoe or Dredd, so I thought "what the hell" and decided to do both.I honestly have no idea why I've never put it on my own blog, but I'm happy for you guys to have it. Dredd in particular was fun to do--I really like drawing faces with character. Thinking I may bug the Mighty Tharg to let me do a Dredd story one day, but if I have to, I'll kidnap his alien dog--apparently it's got a retractable leg so it can leap up at you better, and instead of a mouth it's got four arses...

Finally, I'd like to say what a genuine honour it is to be invited as a guest by the ridiculously talented blokes of Scotch Corner, even though I'm not remotely Scottish. I do however enjoy eating porridge, and I'm a big fan of the Scottish dad in So I Married an Axe Murderer (Och, wudya looook at that heeead....it's like an orange on a toooothpick!). Are you all like that?

Have those girls at Electic Mick's invited me to their bloody blog??? Nooooo....and you know why? Because I'm taller than them,and have better hair. So you know what, Electic Micks can SUCK IT!!! (I'm sorry guys, I didn't mean that, please let me on your blog, please, please, please...I promise I'll crouch down when I speak to you...)

Another great guest post and a big thank you to Leigh. Remember that anybody can take part in Scotch Corner just go here to find out how!
Posted by Graeme Neil Reid at 8:00 AM