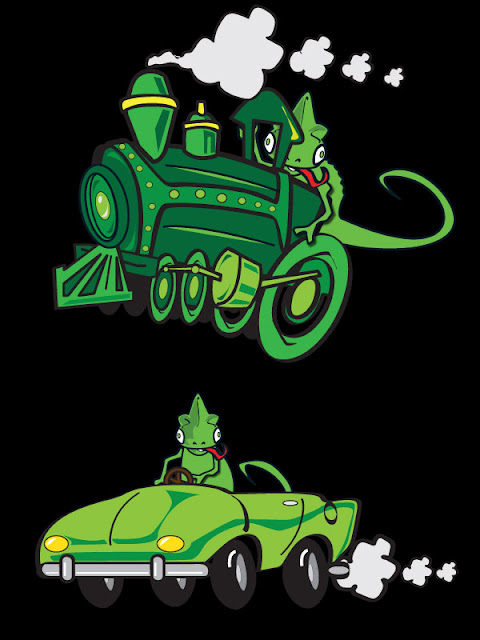 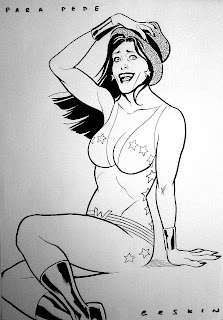 Posted by Gary Erskine at 10:27 AM No comments:

I always figured Bib was a lot more savvy than he actually appeared, he was pretty easily led and obviously fooled by Luke but he looked to me like he'd played it smart to get to the position he was in with Jabba. I don't mean that he was a super intelligent behind the scenes schemer I just mean he caught a lucky break and was clever enough to exploit it. I loved the look of him, those staring eyes and teeth, the slow gait and calm stance. He didn't have much to do in Jedi other than look fantastic and be told off by Jabba.

Michael Carter played the part of Bib (although didn't voice him), he's a good Scots lad from Dumfries with a long list of credits to his name. My favourite though has to be his  scene in An American Werewolf in London, he's the chap running through the London underground, what a brilliant scene, love it.

And I think I'll give the Star Wars theme a break for a bit now, its always fun and I will certainly return to it but for now time for a change.
Posted by Graeme Neil Reid at 8:00 AM No comments:

Another one of my back burner projects is a cover painting of the Marvel character, Ghost Rider.
In preparation for this I built a very quick model of the bike.
I based this on a broad range of references from the comics. Sometimes the bike is drawn quite fantastical and sometimes more conventional, it just depend on the style of the artist who's drawing the strip at the time. My favourite had to be the version with the evil skull face plate and I took my lead from that. 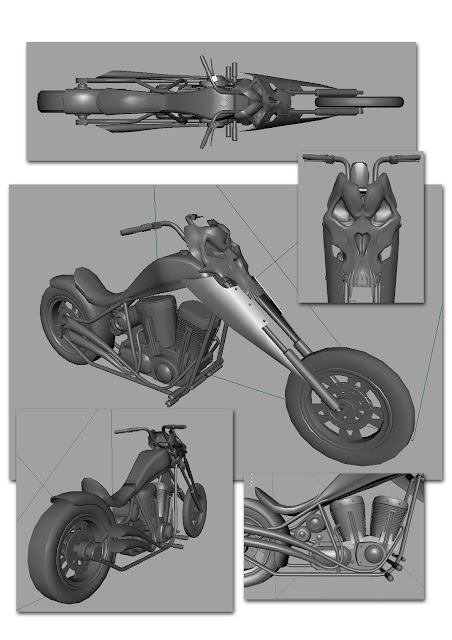 This is a page of 'Partee 2 ' which I drew when I was at college in the late 80s. I never finished the story . As I remember it was changing style every page or so , so the thing was wildly inconsistent looking. This is a normal thing with young artists I discover. It was inked with a Winsor & Newton Series 7 brush. That was my weapon of choice at the time. I've since gone back to brushes ( well brush pens at least ) so I find this oddly similar to what I'm doing now.
Posted by SiFraser at 3:53 AM No comments: 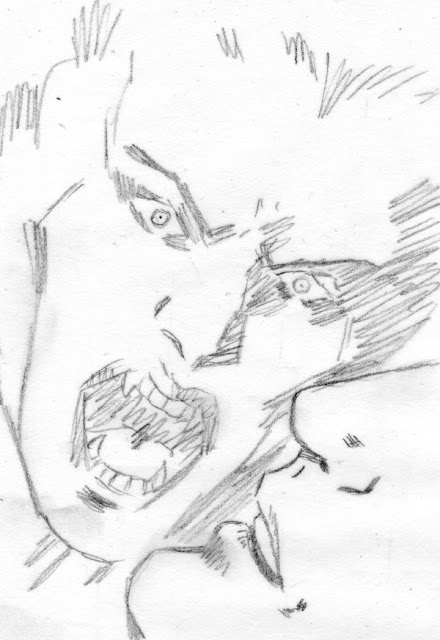 Just a quick vampire doodle.
Posted by Tom Crielly at 11:34 PM No comments: 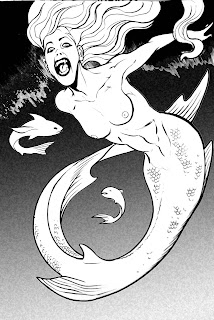 Posted by Gary Erskine at 10:24 AM No comments:

Saying that 'Han shot first' still implies that Greedo even got a shot off and lets face it he didn't. Han shot him, shot him dead in a shady bar full of disreputable characters who couldn't care less that Han shot him first, second or even later that day. And if we are honest the fans of Star Wars didn't care that Han had shot Greedo well before the need to feel that Han might have given the alien a fighting chance. Why would Han give Greedo a chance?

Back to drawing Harrison Ford and my quest to capture his likeness on paper, seriously he isn't easy, still I'm pretty happy with this one I think I caught the essence of the guy pretty well without going into major detail.
Posted by Graeme Neil Reid at 8:00 AM 1 comment:

Still monday technically, even if it is half past ten.

So I've been doing some experimenting with sketching and timing myself.  One piece of evidence follows:

Rolling back the years

Back in 2003 when I was living in France and drawing 'Family' for the Megazine. I was regularly chatting with Frazer Irving on ...whatever IM system was fashionable at the time. I had found a whole bunch of kinky pencil illustrations by Esteban Maroto ( one of my heros ) and I thought it would be fun to try and ink them . Just for fun and maybe to learn something. So I did this one and Fraze did another one. Sadly I don't have a copy of the one Fraze did. I seem to remember it was excellent , which will surprise no one here I'm sure.
The pencils were printed out Blue-Line and then inked with a Zebra G-nib or maybe a Maru pen . I don't remember.
Posted by SiFraser at 3:47 AM No comments:

W is for Wolverine

Wolverine sketch - wahay, finally got around to drawing something that i could colour up with the Pantone promarkers i've had sitting on my desk for the best part of a year.
Posted by Tom Crielly at 10:10 PM No comments: 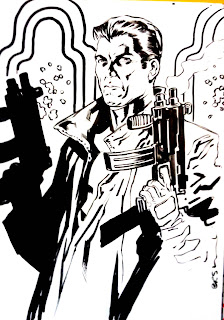 Posted by Gary Erskine at 10:22 AM No comments:

I remember watching Return of the Jedi for the first time in the cinema and being fascinated by the bounty hunter Boushh, he looked cool (yes the character is meant to be a 'he'), acted cool, spoke cool, had caught Chewbacca and had the cahoneys to bargain with Jabba the Hutt with a thermal detonator. Yeah, pretty cool in my book.

As a family I wouldn't say we where poor by any means but we didn't spend money wastefully and while every other kid had Star Wars figures aplenty it took until I was given pocket money and saved up myself before I started collecting the toy figures. The very first figure I bought was Boushh (with the removable helmet to show… oh my gosh it was really… ). I never had an extensive figure collection, could never afford any of the vehicles or ships but I was happy with what I had. I'll mention a remarkable act of kindness shown to me by my brother. One Saturday I was poorly and while watching the wrestling (Big Daddy and Giant Haystacks not WWF in those days) my brother went out to town, when he came back he had been to the Co-op toy department and bought me a Gamorrean Guard figure. I'm still suspicious to this day, surely he was after something or trying to make up for some wrong doing but I guess really he was just being a most excellent big brother. Thanks mate :)
Posted by Graeme Neil Reid at 8:00 AM 1 comment:

Posted by Jon Hodgson at 3:42 PM No comments:

He's a holy man who hunts demons but he's no angel himself and there's no rest for the wicked.

Please check out the Vixens Facebook page this month for your chance to win a VVW T shirt.
http://www.facebook.com/pages/Vampire-Vixens-of-the-Wehrmacht/179230265443902
Posted by Alex at 7:47 PM No comments: 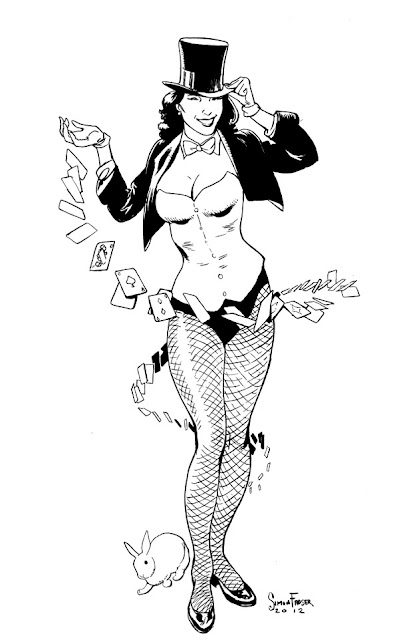 Nuff said really.
Posted by SiFraser at 6:30 PM No comments: 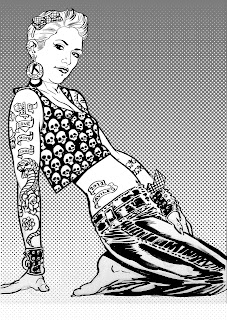 Posted by Gary Erskine at 10:08 AM No comments:

From quite a few months ago for The Onyx Path, The Lost; Victorian book. © The Onyx Path 2012. (sorry folks! I've managed to post late 2 weeks running! oops...)

I've always loved The Empire Strikes Back its just got loads of great bits in it (and not too many puppets) and we are back to some excellent model work from ILM on the four legged Imperial Walkers that we see at the start of the film. In many ways the AT-AT's are the very worst kind of 'heavy tank', slow and with not a huge amount of ordinance, their long legs seem somewhat of a mistake too on the battlefront. But like many things in Star Wars for all their failings they look really really cool. Lumbering through the snow drifts in the Battle of Hoth, stomping along, blowing things up, yeah they rock. For all the digital tom-foolery you get on the sequels you can't beat the use of stop animation on the AT-ATs, it just works perfectly.
Posted by Graeme Neil Reid at 8:00 AM No comments:

Just a quick one.  ArtRage.

Posted by Jon Hodgson at 2:13 PM No comments:

Raiders of the lost Arc-hives

Unearthed this really old sketch from the early 2000's. It was for a TV show that speculated what if dinosaurs didn't die out, how would they evolve and would they have experienced periods similar to humans, Bronze Age, Medieval etc. 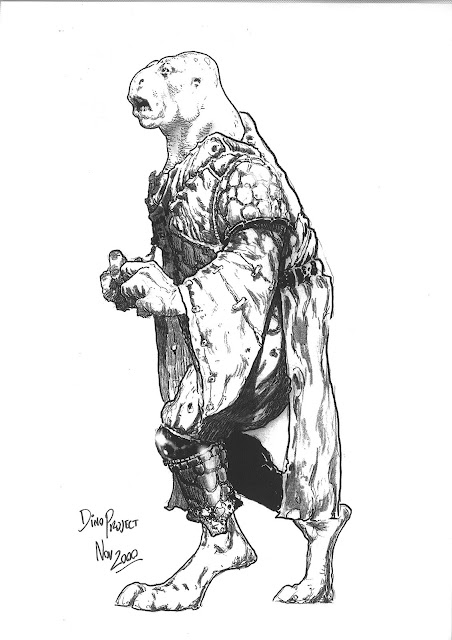 A robot that I drew for my own sick amusement. 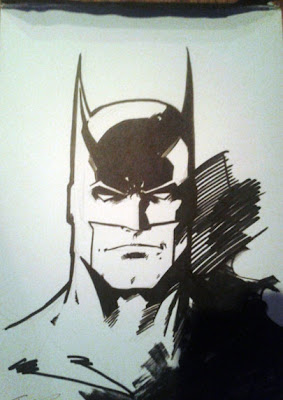 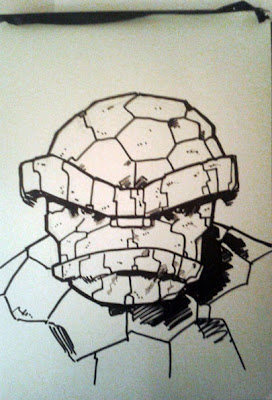 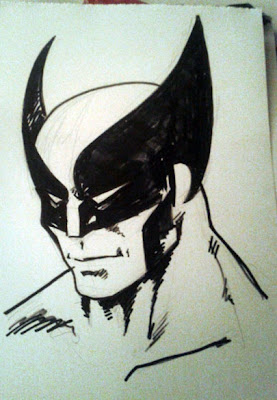 Posted by Tom Crielly at 3:31 PM No comments: 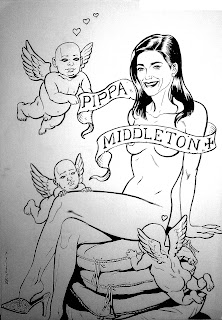 Email ThisBlogThis!Share to TwitterShare to FacebookShare to Pinterest
Labels: Gary Erskine
Newer Posts Older Posts Home
Subscribe to: Posts (Atom)
Scotch Corner is a collection
of Scottish professional artists.
They include Thomas Crielly,
Gary Erskine, Simon Fraser, Andy Hepworth, Jon Hodgson, Ian McQue, Graeme Neil Reid and Alex Ronald.
Every day there will be a new piece of art* posted, each artist posting on a certain day.
This blog is shamelessly inspired and ripped off from the Eclectic Micks.
*Art being a sketch, doodle, painting, photograph, blank canvas, whatever.
All the art on this website is © their respective creators. No material can be used without the permission of the owner. All the artists are available for hire and can be contacted through their own websites.