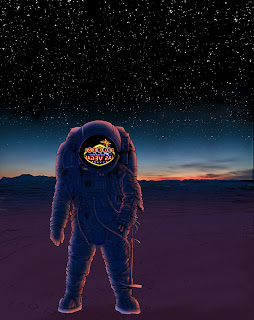 Earthfall was a series commisioned by Dark Horse Comics as part of their Zombieworld line back in 1998. Gordon Rennie and myself were lined up for this three part story and then the plug was pulled and the series was cancelled. Pity. It would have been really good. Great script from Gordon.

This is a new colour version of the proposed cover for the Dark Horse series. Who would have thought that in 1998 zombie comics would not sell? Resident Evil 2 was selling millions of copies on release but this comic series died. Permanently. It can be a very strange world sometimes. The writer Gordon Rennie went on to continue writing for comics and computer games. Still hopeful we can resurrect this project. The time is definitely right now. 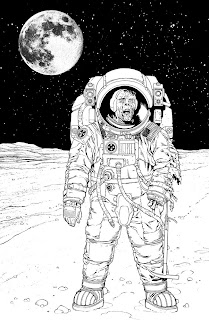 The black and white lineart was done back in 98 and was the only work seen. I decided recently to colour up this image myself and rework some of the ideas slightly. The punctured suit and skewered arm still remain but the zombie face is replaced by a reflection on the helmet visor of the Las Vegas lights. The idea is to subvert the classic iconic Apollo and Neil Armstrong image, confusing the viewer with the neon sign reflection. Yes, this is on Earth!

I am still trying to find a balance between keeping the lineart clean and visible and having the overall feel and colour kept dark and ominous. Fairly pleased with the final result though.
Posted by Gary Erskine at 7:37 AM