Today, taking a break from the cast of Tempest, we have an illustration from Hunters Hunted, from The Onyx Path/White Wolf stable.  I started painting this with actual real-life paint, but then actual real life got in the way, the deadline got too close and it got done the practical way in the end.  You can tell that it is not wholly digital, I think?  © The Onyx Path 2013

S is for Strange

I drew a few Marvel superhero commissions back in November which can happily fall into the old Marvel A to Z theme from many moons ago. So here we have Dr Strange (I suppose it could have been D is for too) and as usual I know nadda about this guy. I've read a few comics in which he appears and he always seems to be cross legged floating about magic guy. Overall for a superhero I don't know I'm pretty happy with how this turned out.
Posted by Graeme Neil Reid at 8:00 AM No comments:

A piece I did for a game book Cthulhu Britannica: Folklore.  One of the really nice things about working closely with the layout guy, Paul Bourne, is that we can do stuff like this.

Posted by Jon Hodgson at 4:39 PM No comments: 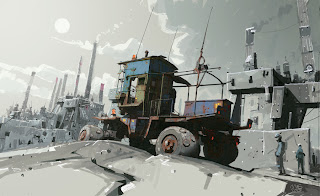 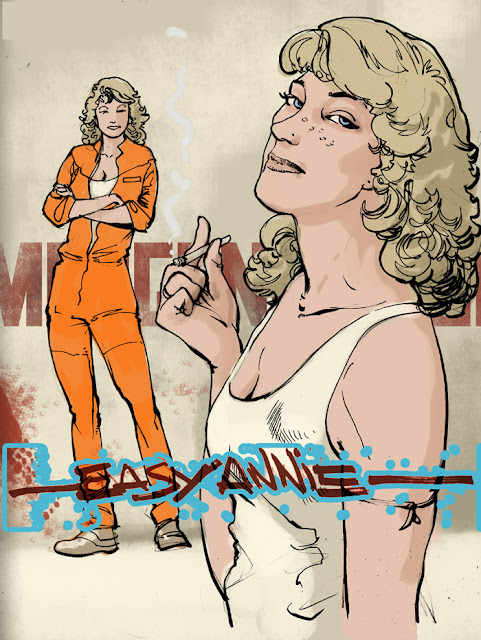 From a project I'm working on. More on that in the coming months.
Posted by SiFraser at 2:49 PM No comments: 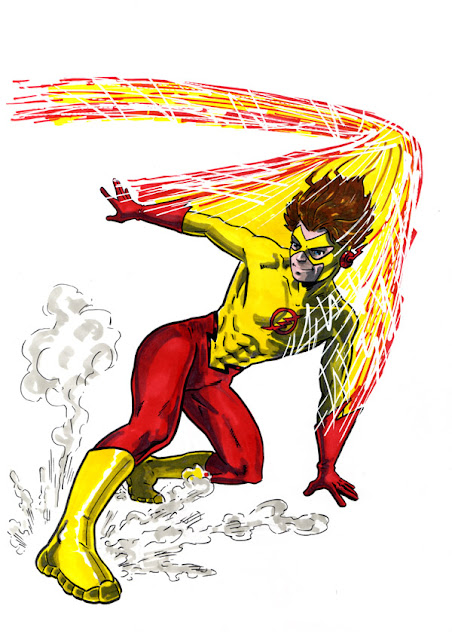 Pantone marker sketch of the Bart Allan version of Kid Flash (pre New52)
Posted by Tom Crielly at 12:06 AM No comments:

Tom Baker as Doctor Who. 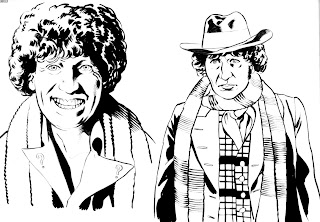 Although I caught the last few episodes of John Pertwee's Doctor (including The Planet of the Spiders regeneration) Tom Baker will always be MY Doctor. I loved his eccentricities and jelly babies and THE scarf. A real bravura performance by Tom Baker and a great wardrobe and fedora hat.

Mad as a brush too.
Posted by Gary Erskine at 12:17 AM No comments:

Today I give you a lowly bricklayer.  Odd pipe aside I have a lot of lurve for this piece.  Still, that's what happens when you haven't seen someone for a year or so, eh?  © AEG 2010.
Posted by Andy at 3:44 PM No comments:

If in doubt get the Krueger out! The 1984 film A Nightmare on Elm Street was apparently made for $1.8 million, that seems an impossibly low figure for what the film achieved and kind of explains why they milked it so much with later films.
Posted by Graeme Neil Reid at 8:00 AM No comments:

Honoured to have been asked to contribute to this fine blog so without further ado, here goes... 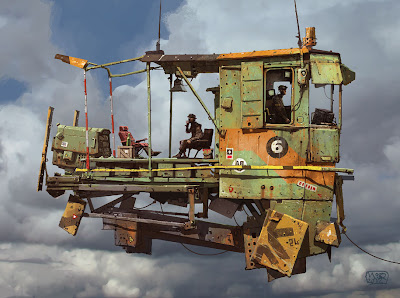 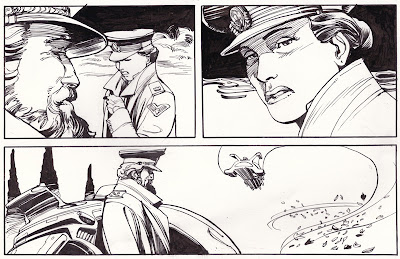 This is from a page I started to draw for one of the early books of Tsar Wars and never finished. It's obviously Jena talking to her Dad. I think Burns drew the final scene and I moved over on to The Battleship Potemkin story instead. I drew it when I was living in Vienna Austria. There was a lot of swooshing linework going on then.
Posted by SiFraser at 5:58 PM 1 comment:

Pantone sketch of Terra - originally introduced into the New Teen Titans back in it's heyday when it was the best book DC was putting out (by Marv Wolfman and George Perez - still one of the best comic runs ever) and giving X-Men a run for it's money. A great fun character, she was revealed to be a traitor in the midst and actually working alongside Deathstroke (doing the rounds in the Arrow TV series just now) to take down the Titans. Eventually killed off but has been brought back several times as a future clone etc. since - no idea of her status in the New 52 though espescially as all of the Wolfman/Perez run has been 'wiped'.
Posted by Tom Crielly at 10:45 PM No comments: 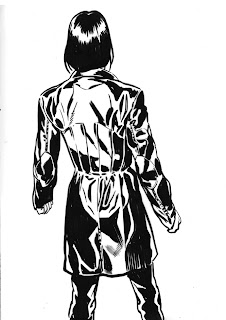 Leto. Portrait. A small study from The Irons: Hybrids. Some minor photographic reference for the coat.
Posted by Gary Erskine at 8:57 PM No comments:

The old Senator And Philosopher

First of all, this is a double post - I was sure I had posted last week, but some emergency or other must have leaped upon me and thrown things into disarray (I also had a Thursday deadline last week).

Patrick Moore and The Sky at Night is one of those constants I remember from my youth, I may not have seen many of the shows when I was younger but it was as common as the man saying 'don't forget to turn your set off' at the end of the night. Always enthusiastic and utterly captivating as a presenter you couldn't help but be drawn into his love of astronomy. Plus he was a regular on many other shows like Morecambe & Wise, Blankety Blank or being impersonated by others picking up on his rapid speech and his eccentric manner.

About 15 years ago I had a very short telephone conversation with the man. I was working late (about 10pm) in an office on my own and the telephone rang, it was Patrick Moore wanting to speak to someone about an interview he was due to be doing with a magazine I did work for. I explained that it was the back of ten at night and the people he needed to speak to had gone home for the day. He seemed somewhat confused at the concept of people not being around at night, I guess he has spent more time up working at night than most :) So that was my brief conversation with Sir Patrick Moore, to begin he sounded more like someone pretending to be him and I thought someone was playing a trick on me but no it was indeed him.

If you live in the UK and have access to the BBCs iPlayer facility there was a couple of great shows about him on BBC4 this past Sunday night, I recommend Sir Patrick Moore: Astronomer, Broadcaster and Eccentric and Mark Lawson Talks To…

This illustration is based on a photograph of Sir Patrick Moore taken in 1984 for his Presidential Portrait of the British Astronomical Association.
Posted by Graeme Neil Reid at 8:00 AM 2 comments:

A commission from a while back. Ian Gibson's linework is contagious. 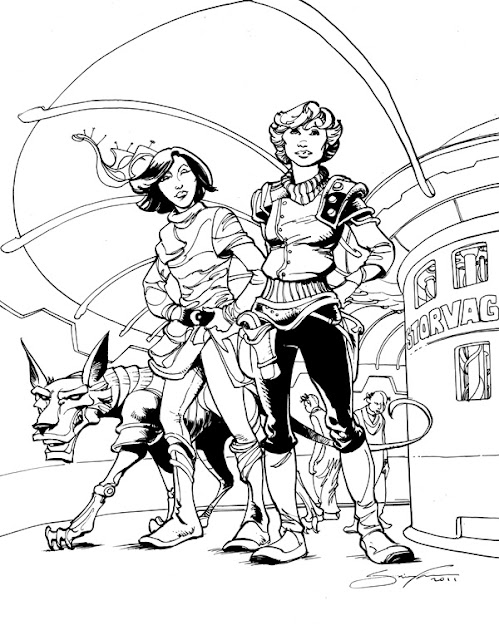 Posted by SiFraser at 5:46 PM No comments: 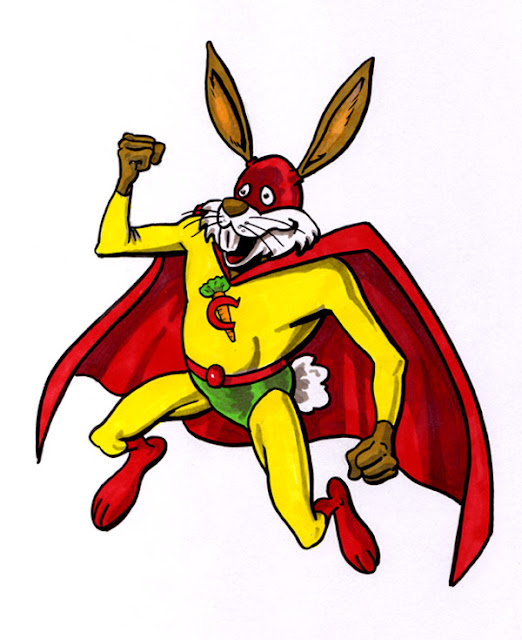 Coloured up with pantone promarkers.
Posted by Tom Crielly at 10:55 PM No comments: 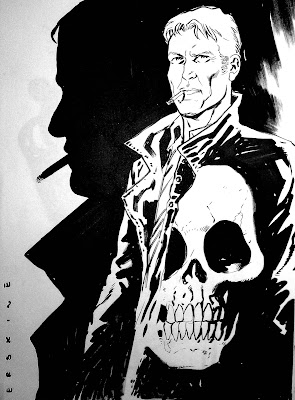 Posted by Gary Erskine at 10:26 AM No comments:

The crime is life...

Here is a recent commission and a favourite subject of mine, I never seem to tire of drawing this dead judicial horror and it's a pleasure when someone asks me to render his rotten bones again.
Posted by Graeme Neil Reid at 8:00 AM 1 comment:

My review of the year.  It has pictures if you scroll down past all the words. 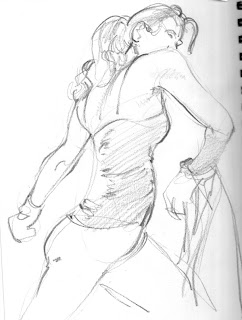 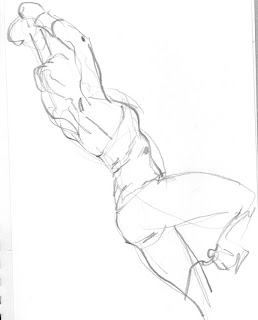 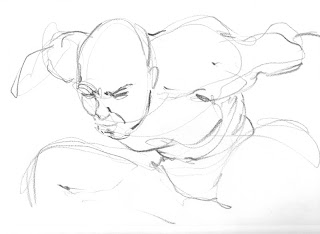 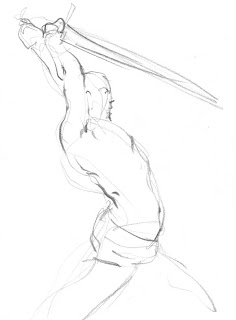 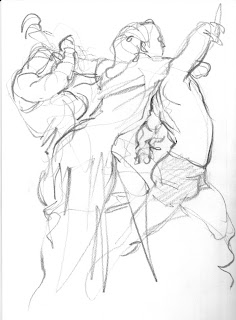 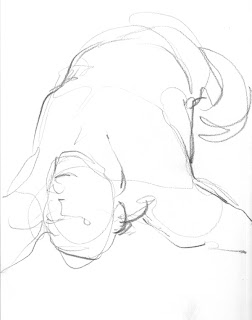 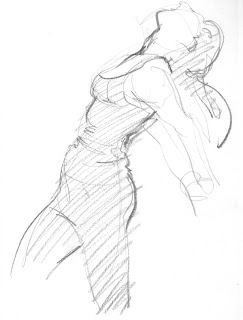 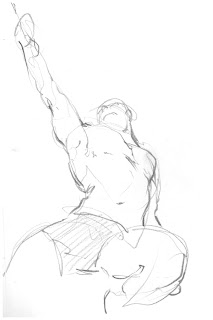 Some 2 minute skecthes drawn at the monthly Dare 2 Draw at the Society of Illustrators here in New York. We had a particularly dynamic set of models this time.
Posted by SiFraser at 1:52 AM No comments:

Oops - totally lost track of the days - still in festive holiday mode. Hope everyone had a great Christmas and New Year.
So last minute panic digging round my archives to find something and found these - they were originally part of a set of illustrations created for a council publication (done in a comic strip format) for school kids to teach them about being eco-friendly (i think). These three ended up being edited out and were never used. Hand-drawn and digitally coloured in photoshop.
Posted by Tom Crielly at 11:43 PM No comments: 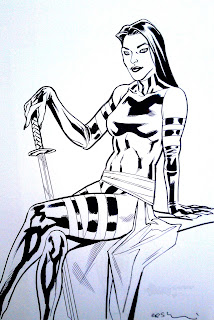 Posted by Gary Erskine at 10:35 AM No comments:

A town guard from AEG's Tempest board game range. © AEG 2010

Happy New Year! Start 2013 with a very large gun (and chin) shoved in your faces. The real Judge, Jury and Executioner. I feel I got a pretty good handle on Joe Dredd for this piece, annoyingly I think I got him more right here than when I drew him in the Megazine. Still that is experience and dare I say a little experimentation coming into play.
Posted by Graeme Neil Reid at 8:00 AM No comments:

Email ThisBlogThis!Share to TwitterShare to FacebookShare to Pinterest
Labels: Graeme Neil Reid
Newer Posts Older Posts Home
Subscribe to: Posts (Atom)
Scotch Corner is a collection
of Scottish professional artists.
They include Thomas Crielly,
Gary Erskine, Simon Fraser, Andy Hepworth, Jon Hodgson, Ian McQue, Graeme Neil Reid and Alex Ronald.
Every day there will be a new piece of art* posted, each artist posting on a certain day.
This blog is shamelessly inspired and ripped off from the Eclectic Micks.
*Art being a sketch, doodle, painting, photograph, blank canvas, whatever.
All the art on this website is © their respective creators. No material can be used without the permission of the owner. All the artists are available for hire and can be contacted through their own websites.