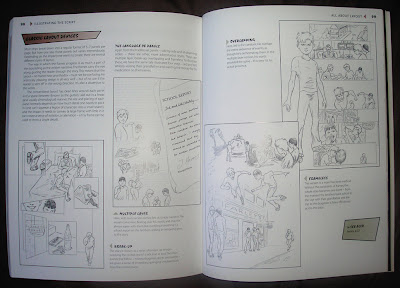 A spread from 'Writing and Illustrating the Graphic Novel' by Mike Chinn -sorry for the quality of the photo- just realised it was Friday and i've no idea where the original art is and can't find any scans. Click through for a larger version.

These pages dealt with various ways to layout a story page - not just in terms of 'boxes' but on a more conceptual level. Pencils were done half way between thumbnails and finished and done more cartoony than my normal style - think that was my choice at the time (but can't remember why)

Right off to get drunk for a few days - have a great New Year. I've decided on a New year's resolution for Scotch Corner so i'll be starting that next week - hopefully it will go better and last longer than all my previous resolutions over the years.
Posted by Tom Crielly at 3:29 PM No comments: 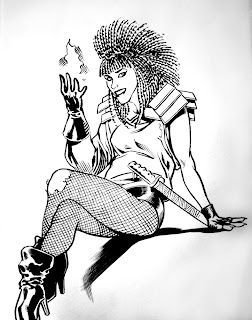 This particular sketch of Typhoid Mary was requested at Leeds Thought Bubble in November. Never drawn the character before and only half-remembered the costume. Thankfully we had a spare Daredevil comic to hand to remind us. Coincidentally, John Romita Jr. was only a pen's throw away at another (bigger) table but I didn't want to hassle the guy. Besides, there was a huge queue of fans in front of him and I didn't fare my chances of getting to him!

10 minute turnaround from initial rough.
Posted by Gary Erskine at 11:59 PM No comments:

A bit of a development on a painting of some redcoats I was doing months back, now pushed on a little further, adjusted, corrected, mistaken and revamped.
I reckon the beard is a mistake - I can't find a line of text which says British infantrymen (Light infantrymen in this case) had no beards in the Napoleonic era, but I have never seen a British soldier illustrated with a beard in any source from the period/illustration of the period. I'm not even sure 'taches were allowed for the rank and file soldiery. But I quite liked the way it looked, so there.
Posted by Andy at 2:14 PM No comments:

I was asked by Pete Wells if I'd like to contribute to the 2000AD Community Board's annual advent calendar, the theme being of course something 2000AD related. Nothing says Christmas like a graffiti scrawled Justice Department H-Wagon in the dark snow filled sky of Mega-City 1 more. Hope you had a great Christmas and have an even better Hogmanay and New Year!
Posted by Graeme Neil Reid at 10:23 AM 1 comment:

Missed my slot yesterday, so I'm retroactively back dating this one.

I found this on my HD it's called "Stabfawn". I think it's a PS brush test. Make of it what you will. 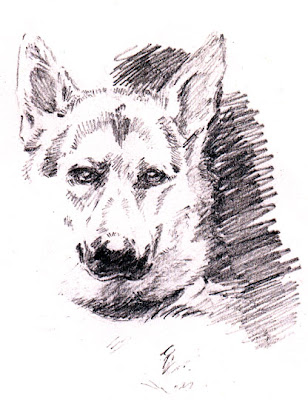 Running about in a headless chicken parent mode just now doing Christmas Eve duties, so just time to post a quick doodle from my sketch book - a biro scribble of a mate's alsation.
Merry Xmas one and all.
Posted by Tom Crielly at 11:31 PM No comments: 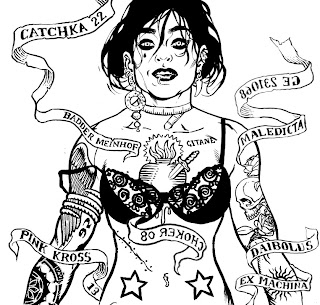 Adri Cowan asked me to contribute to her 12 Days of Comic Book Christmas post for the Comics Alliance site. The series would feature various creators producing their own take on the 12 Days of Christmas. I was paired with Warren Ellis and asked to provide Day Seven. Warren, of course, supplied a suitably barbed piece of prose.

You can see the other contributors here.
Posted by Gary Erskine at 9:58 PM No comments:

Its a Scrooge's miserly christmas greeting from Ebeneezer Tightfist Curmudgeon McHepworth this week. Aye, freezing to death? Luxury! When I were a lad we was so cold that we never even thawed out during summer. Summer? We never even had summer when I were a lad, A Lad, we never had children when I were...

I drew this what seems like a lifetime ago now when I was still fully employed in the design and marketing industry. I sat and doodled it one day at my desk and it made me laugh enough that I got it printed as a Christmas card. Still makes me chuckle.

Have a great Christmas!
Posted by Graeme Neil Reid at 9:30 AM No comments:

Not my words - I stole them from Youtube where someone has written some much more in tune with my own thinking than I could manage to fit into words myself:
"Rest not in peace, but as you lived; a raining sonic flame, vivid- and by christ did you make the hairs on the neck stand up!- Don, you were not for this world, enjoy your long﻿ dance into dust my friend. I speak for all when I say 'Rest In Peace'- but dont be too quiet about it."

It's possible that I'll be drinking Scotch in a corner somewhere next week, so.... 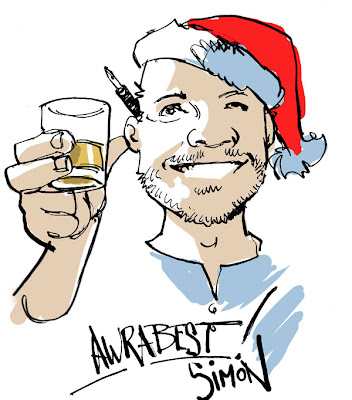 Happy Holidays to one and all. Thanks for watching this year and here's to 2011.
Posted by SiFraser at 7:00 AM 1 comment: 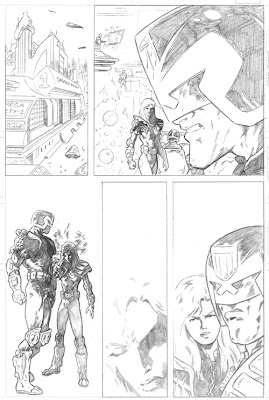 Not really much to say about this one - along the same lines as last week this is another Anderson pencil page that i came across whilst clearing folios, although this one has Dredd too. Click on the image to view the larger version.
Posted by Tom Crielly at 11:14 PM No comments: 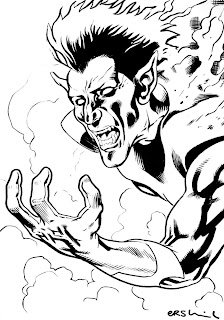 Although we all sit on top of months, if not years, worth of work which is covered/protected by Non Disclosure Agreements (NDAs) occasionally the companies we work for will produce their own sneak previews of art for up and coming products. In this case I've had the go ahead to show off another piece of CCG artwork after the company did a teaser post last week.

I don't often pose live models for images - I should do it far more often than I do - but a friend stood in for the preacher in this instance (and doesn't it make a difference!?). Ta to Frank Morrow for the top class modeling!
Posted by Andy at 1:37 PM 1 comment:

The old Christmas rush deadlines are biting at my heels this week so here is a pencil sketch done back at the start of 2009 of Marv from Sin City.
Posted by Graeme Neil Reid at 8:00 AM 2 comments:

Scraped it in just in time!

A cover for Ulisses Spiele, a fantastic German games company.

I'm contributing to a series of Savage Dragon backup stories that are running as support to Eric Larsen's main strip. The page I did featured this character , Robo-Dragon, which was drawn in a 'British kind of way'. It's some way from publication , but here's the character sheet I drew.
Posted by SiFraser at 11:45 PM 4 comments: 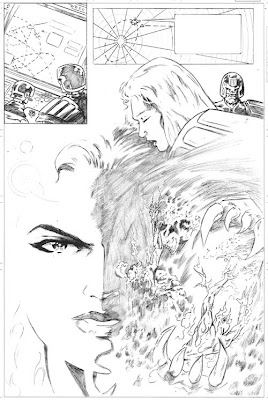 Woops -alomost missed this one due to crazy catch up hours enforced by the recent nonsense weather. Anyhoo, rescued by a page from some Judge Anderson samples - click on it to view a larger version.
Posted by Tom Crielly at 11:48 PM 2 comments: 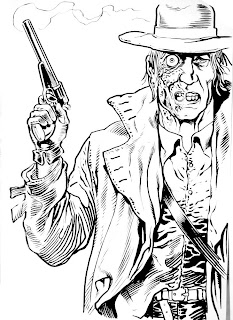 Cyberpunk illo from Fanpro? Catalyst game labs? Shadowrun pen and paper RPG. The license has changed hands quite a few times, and although I think it was done when Fanpro owned it, Catalyst now produce the product, and also now own the artwork. Shadowrun is an RPG which blends fantasy elements - magic, elves, dwarves, orcs - with the modern 21st century cyberpunk.

I seem to be sitting on years of NDA'd works at the mo, so new stuff is trickling onto the blog slowleeeeee. Damn the red tape!

What's it all about…

Pencils for a painting finished about five minutes ago.
Posted by Graeme Neil Reid at 9:03 PM 2 comments: 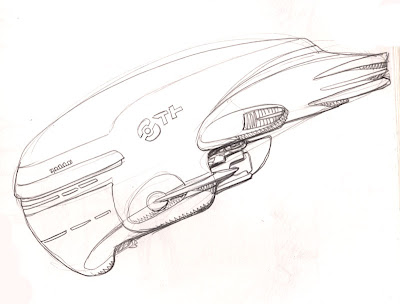 It's a spaceship. I doodle this kind of stuff all the time.
Posted by SiFraser at 4:45 AM No comments: 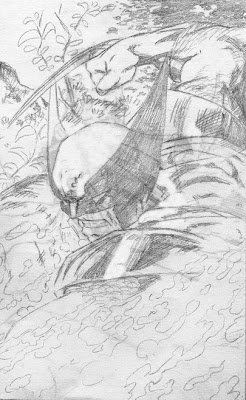 Just a quick doodle of Wolverine from my sketch book this week - unfortunately the paper in that particular sketchbook is a bit thin so apologies for the 'see-through' that appears in the scan from the drawing on the other side.
Posted by Tom Crielly at 11:19 PM No comments:

Captain Britain - The original and best. 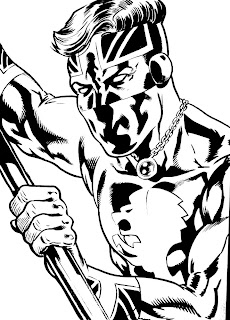 Another sketch from Lille. This is my favourite Captain Britain costume. The original and best red version. Not the easiest to draw from memory (thanks to Lionel for supplying me with a copy of a French Marvel Comics Presents) Wonderful stuff from John Byrne and the Arcade character.
Posted by Gary Erskine at 9:09 PM 1 comment:

Following on from last week's small image from Cthulhu Britannia; Avalon, we have a larger illo from the same product - our investigators being attacked by a nameless horror inside some desolate farmhouse.