An image from the Onyx Path's Progenitors book for Mage.  It is only now I look at this fresh that I think I've illustrated half of The Scooby Gang by accident.  Put glasses on the bookish girl and you'll see what I mean.  © The Onyx Path 2013

Posted by Graeme Neil Reid at 1:53 PM No comments: 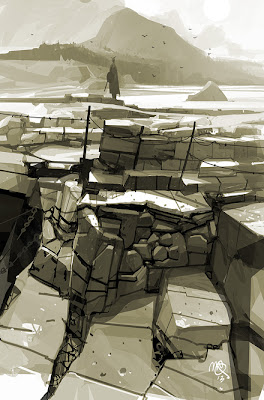 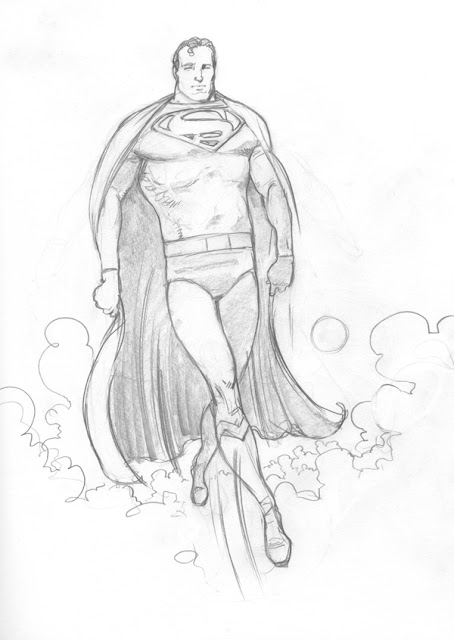 Yup, another Superman. I reckon I'd going to work through this theme until I am happy with what I'd doing.

I always really liked the way that the Richard Donner /Christoper Reeve Superman touched down on Lois Lanes balcony, it was very light, very delicate. It implied great control. Like parallel parking the USS Nimitz. I think that's one of the great things that Frank Quitely & Grant Morrison did with their All Star Superman too, they implied an unhurried delicacy to the man's actions that belied his immense power.

I missed my allocated date ...again. So this is a retro post, from the present to the past which I did by flying around and around the world REALLY fast ( in my mind )
Posted by SiFraser at 6:01 PM No comments:

Have at thee, Knave 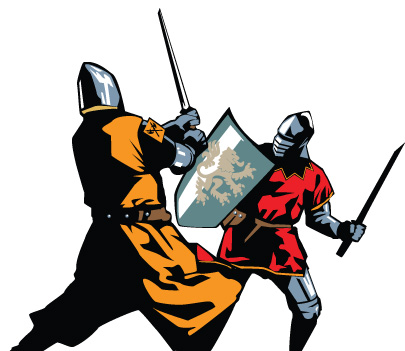 Another part of the collage set for Kirkcaldy Galleries opening events. They have a medieval fare, jousting tournaments and re-enactments etc. Doodled up in illustrator.
Posted by Tom Crielly at 11:58 PM No comments: 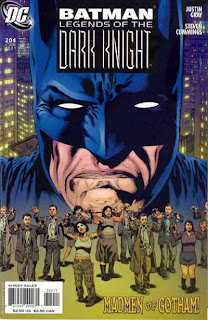 A cover for Batman:Legends of the Dark Knight from a few years ago. Very pleased with this image and continues my focus on headshots and faces as the primary element of the cover. It's an approach that is also seen in my Dredd pics too.
Posted by Gary Erskine at 12:45 PM No comments:

This was a smith from L5R from what I understand is a new clan.  I got to help design the mon with Adrian Burton!  Fold that metal 2999 times more please!  © AEG 2013 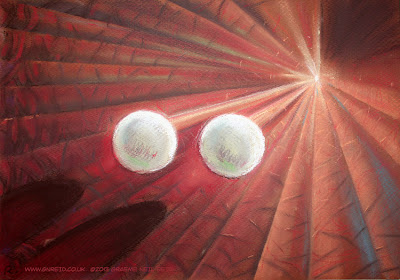 Chalk pastel rough for a painting that is haunting me, its not going to look like this but sometimes you got to put something on paper to begin.
Posted by Graeme Neil Reid at 5:04 PM No comments: 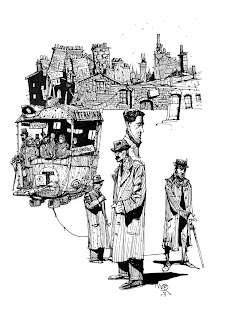 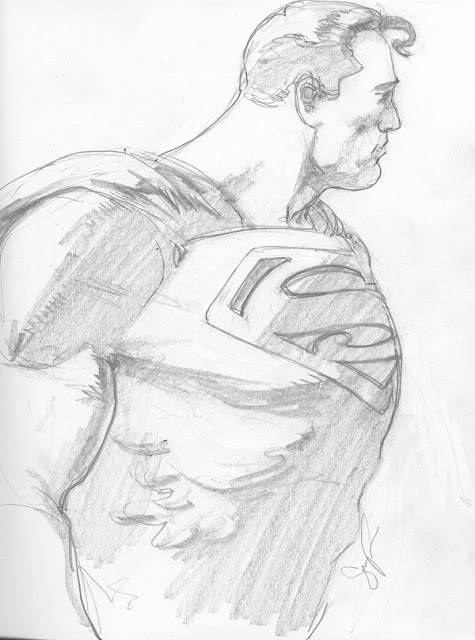 I like Superman, he's the original and greatest of all Superheroes. I read a lot of classic Superman when I was a kid. I'm not sure that I have ever managed to draw him to my satisfaction though. He shouldn't be too ripped, but he should be massive ( like Curt Swan used to draw him ), he should never look like he's straining that much either. Too many artists draw him looking like his toenails are being pulled out with pliers. There's a magnificent grace to Superman because a truly great Superman story is rarely about physical duress, it's about morality and ideas. It's not about extreme violence ( unless absolutely necessary ), it's about finding out what right and then doing it.
Posted by SiFraser at 9:23 PM No comments: 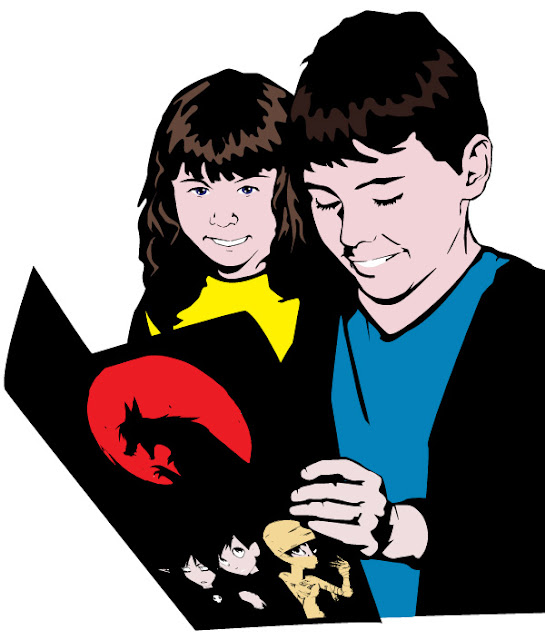 Aaargghh! Full time freelance is completely screwing with my weekday settings - managed to forget it was Friday again yesterday! Anyway, one of the projects i've been working on is for the new Gallery/library/Museum opening in Kirkcaldy soon. Part of the job involved a collage illustration for the opening weeks events, this element was for one of the kids reading events in the library. Tried my bamboo and pen again but it looked like it had been drawn by a two year old (really need to find time to practice with it) so ended up drawing it with my trusty mouse in illustrator. I'll probably post up a few other elements next week if i give myself enough time to resize and jpeg them.
Posted by Tom Crielly at 9:15 AM No comments: 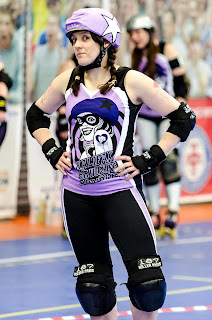 And now for something a little bit different...

I was asked by Liz Markey of the Halifax Bruising Banditas to design a new team logo for them [incorporating the original brand logo] for their new bout strips. We decided on a masked derby player in the style of my Roller Grrrls project and making it fun. The target was a late addition in the day as we needed a background and it kinda made sense and made for a great design element. The fist tattoo is another nod to the original logo design and works very well in the context of our character.

Overall I am delighted to be part of the team bout design process. Taut Clothing did an amazing job finishing off the tops and Sue Perman is seen here modelling the finished design.  The group shot also shows how Bad-Ass the girls look when they are bouting together! 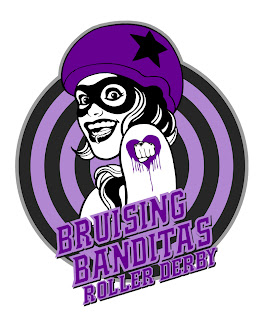 Posted by Jon Hodgson at 9:48 PM No comments: 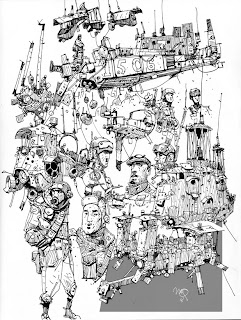 It's early days for this project , but here's a panel. More later.
Posted by SiFraser at 1:27 PM No comments: 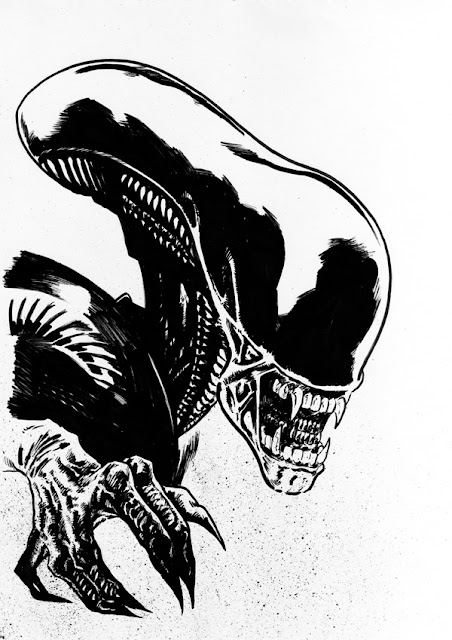 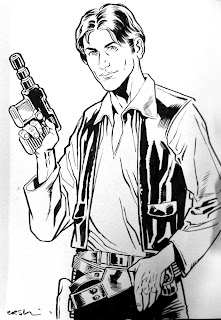 Posted by Gary Erskine at 3:08 PM No comments:

An illo for New World of Darkness book, The God Machine.  © The Onyx Path 2013 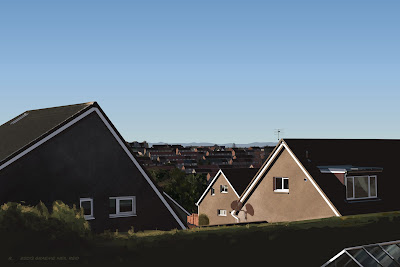 Something a bit different from me for a change, a digital painting of a fairly normal view. In fact this is one part of a view from my bedroom window that I've looked out over for the last thirteen years. I've often sat on my bed in the morning and looked out over the distant housing estate and slowly become entranced by the shapes and colours that make up the visual. Even the most humdrum scene can hold its own kind of beauty I suppose. I wanted to do a study of these blocks and keep it fairly simple. Around 80% of the painting was created in Adobe Illustrator and then brought into Photoshop to add some texturing and highlighting. Even though it's a straightforward looking scene I'm pretty happy with it, especially the illusion the shapes play on your eye when it is seen at a much smaller size hopefully making you think it's a photograph more than a painting, with your brain filling in the extra detailing. I hope anyway. 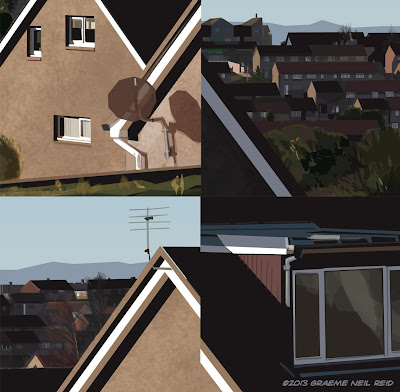 You may or may not have noticed that I've stuck a copyright line on this work, something that you will probably be seeing a lot more of in times to come. A recent legislation, Enterprise and Regulatory Reform Act, has effectively taken the rights of the person who created a piece of work and handed it over to the public domain. Effectively anything that has appeared on the internet, including your own family snaps on Facebook, could be open for the financial gain of others. Plenty of other people can explain this legislation better than I can, please click on the links for further reading, but the bare bones of it is that anyone can in the future see a picture you posted at any time and having attempted to find the creator of the picture and failed can then use the item in any way they deem fit, including selling the image on as their own. This might seem a difficult thing to prove right away, take the painting I've posted above, it's hardly been on the net, my name is plastered on it but who is to say in thirty years time when I've forgotten all about it that someone just doesn't discover it for the first time, copies the file, replaces the data embedded onto it, crops of my copyright line and sells it for their own use? Anything I create belongs to me and in the future my family. The ownership and rights of the works anyone creates should stay in their hands. Please go sign the petition below if you'd like to see the stop of legalised theft of copyrighted works.

At the moment my copyright line is fairly small and really such a slight deterrence to those who would wish to steal my work. Do we want to get to the position where a whole image is ruined by a massive watermark placed over it? Do we want to go down the route where websites like Scotch Corner don't exist because anyone can steal our work?

Personal work, not quite finished!

School of the Damned preview page 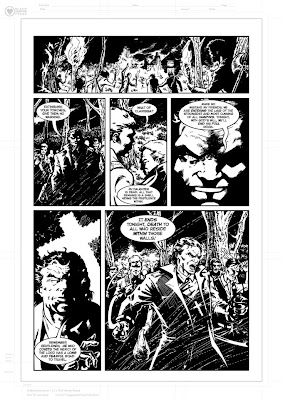 Preview page from School of the Damned #5 on sale soon.
Posted by Tom Crielly at 11:57 PM No comments: 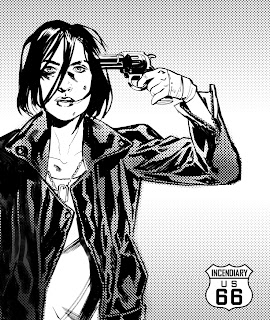 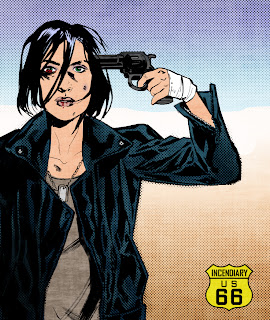 Posted by Gary Erskine at 11:01 AM No comments: