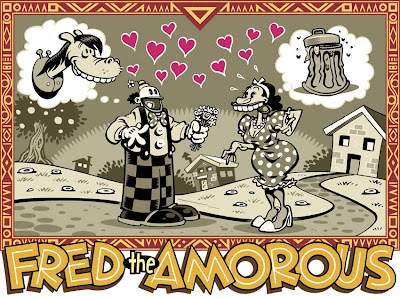 1) What was your first published work?
My absolute first published work was a strip on the children's page of a Sunday newspaper - a fairly terrible superhero spoof called Captain Krimble, when I was 13 years old. My first published work as an adult (or somebody who could pass for one in a good light) was a cover for Auckland University's student newspaper in 1988, when I would have been 21 years old - I can't remember what the reason was, but the theme of the illustration was "20% extra", so I drew a lot of people with extra limbs, two heads etc.

2) Who or what inspires you?
My biggest single inspiration is probably The Goon Show, closely followed by the work of Carl Barks (creator of Uncle Scrooge) and E.C. Segar (cartoonist of the original Popeye strips). I've stolen tics and flourishes from dozens of artists that I like, though, everyone from Will Eisner to Edward Gorey to Ken Reid - hopefully assimilating them into my own style for the most part. You shouldn't be able to see the joins if I'm doing it right.

3) What would be your dream job to illustrate?
I prefer drawing stuff I've come up with myself, but if I had to choose something that's already out there, I'd love to have a crack at writing and drawing Popeye. (Or Plastic Man. Or Metamorpho, the Element Man...)

4) Tell us a bit about the illustration you've sent?
This was an early version of the illustration that eventually became the cover for my first self-published comic, Fred the Clown #1, in 2001 - I drew this version in (I think) 2000, originally with the intention of releasing a collection of my web strips featuring the character with these illustrations as chapter headings. I redrew the picture from scratch for the eventual comic.

The Fred the Clown character was something of a blank slate upon whom I could throw various styles or formal experiments - the picture itself is heavily inspired by the early animated cartoons by Walt Disney, Max Fleischer and others. I really love the aesthetic of those old, relatively plotless cartoons where the characters essentially just bounced around and suffered pratfalls for seven music-filled minutes.

5) What can we expect to see from you next (what are you working on)?
Coming up: in August, my new series for Boom! Studios, Snarked!, kicks off with a preview issue. This is a Lewis Carroll-inspired comedy adventure which I'm writing and drawing. Then, in September, a few things: a 220-page collection from Boom! of previously uncollected material called The Show Must Go On, collecting work I've drawn and (mostly) written myself over the past 20-odd years; the first issue of an adaptation of Edgar Rice Burroughs' John Carter: A Princess of Mars, which I'm writing (but not drawing - that responsibility falls to Filipe Andrade); and a contribution to Archaia's Jim Henson's Storyteller anthology, in which I've adapted a Scandinavian folk tale called "Old Nick and the Peddler". Last but not least, in November I'm one of the contributors to Nelson, a graphic novel from Blank Slate Books in which fifty cartoonists each contribute a chapter describing one day in the year of the life of a single person, building her life story over the course of the book. I'm inking that one right now.

6) If you hadn't become an artist what do you think you'd have ended up doing?
I may have ended up a performer of some kind - I used to dabble in amateur theatricals and really enjoyed it, but I realised I couldn't do both that and cartooning simultaneously and be really good at both things - so cartooning it was. These days, though, I think if I couldn't draw for whatever reason, writing would be the next most natural thing to pursue.

7) Where can we see more of your work (web links)?
There are links to everything I do at www.hotelfred.com - everybody's welcome!
Posted by Graeme Neil Reid at 8:00 AM