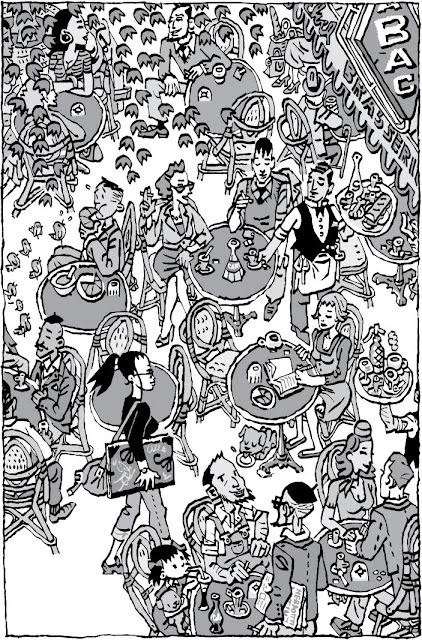 1) What was your first published work?
A drawing in one of those Woman’s Own type mags, in about 1982. They had a competition to design a new Star Wars character and I think I was the runner-up. I won a big AT AT Walker toy. Hmm, I might start putting this info on my comic covers given I've won nothing since.

2) Who or what inspires you?
It’s usually the script. The comic artists who have inspired me the most over the years are Hergé and Jacques Tardi because their works are entire worlds achieved very graphically and stylishly.

3) What would be your dream job to illustrate?
I’d like to draw something with an exotic setting. On location. I mean, come on... I’ve just been drawing Bristol.

4) Tell us a bit about the illustration you’ve sent?
It’s a panel from the graphic novel ‘Paris’, written by Andi Watson. It’s set in the 1950’s and I wanted the art to reflect certain characteristics of the illustration of that era, hence the flattened perspective and so on. That couple at the top of the page reappear in other backgrounds too!

5) What can we expect to see from you next (what are you working on)?
I’ve just wrapped up my contribution to the forthcoming Blank Slate anthology, Nelson. Next up (fingers crossed) is an unannounced one-shot for IDW and then I’ll be drawing a short adaptation of Conan Doyle’s ‘Lot No. 249’ for Graphic Classics.

6) If you hadn’t become an artist what do you think you’d have ended up doing?
I’d like to be an international cricket commentator, but that ain’t the question. I’d probably be fishing shopping trolleys out of the river on behalf of Morrisons.

7) Where can we see more of your work (web links)?
http://simongane.blogspot.com
http://twitter.com/Simongane
Posted by Graeme Neil Reid at 8:00 AM