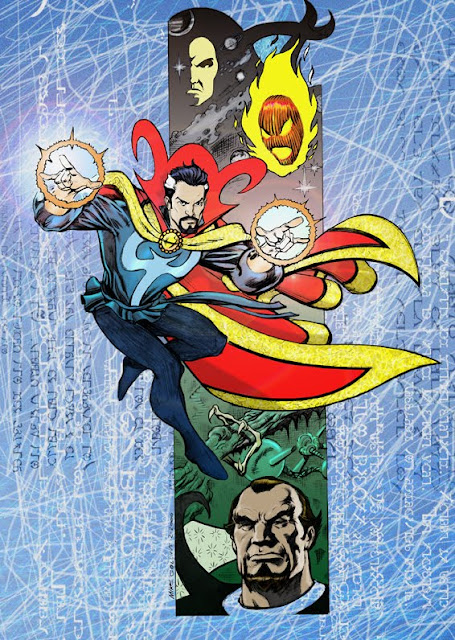 1) What was your first published work?
EXCHANGE & MART 1983- A mate was selling some bit of kit and decided it was cheaper to get me to draw it than supply a photo that needed scanning/fixing.

2) Who or what inspires you?
Good art, bad art. I remember getting some comics on holiday in Morcambe in 1969 when I was eight. Two Adams X-Men and the first Gil Kane Captain Marvel (#17?). I've still got em, all dog eared and bent. They amazed me in the way the lovely but so still art in British weeklies didn't. The dynamism was astonishing. I then discovered Garth by Frank Bellamy, and John M.Burns stuff in Look-In- damnit, we could do dramatic!
Bad art inspires me, as looking at what I don't like makes me see the shortcomings in my own stuff, and strive to fix them.

3) What would be your dream job to illustrate?
See attached: Doctor Strange! I became a comic buyer properly in the early 70s when Frank Brunner was drawing the book, followed by Gene Colan. That, right there, was damn fine comics.

4) Tell us a bit about the illustration you've sent?
In 2000/2001 I was working for Marvel but just on their Star Trek books, and I'd been talking to Bobbie Chase about getting back into super hero work for them. I did a series of pin ups to show what I could do (as I'd gotten pigeon holed into the likeness stuff). This was one of those images.

5) What can we expect to see from you next (what are you working on)?
Mainly working in animation right now, storyboarding Horrid Henry for telly, but I've a Dredd with Cliff Robinson inking me out later in the summer, then some Doctor Who work before the end of the year.

6) If you hadn't become an artist what do you think you'd have ended up doing?
I trained as a lawyer, so I'd be rocking a mouldy wig in some dowdy courtroom as a barrister- and probably being a wee bit richer!

7) Where can we see more of your work (web links)?
Either through my lousily maintained website, www.freakhousegraphics.com, or on Deviant Art http://mikecollins.deviantart.com/, where a I post a lot on my non-comics (illustration) work.
Posted by Graeme Neil Reid at 8:00 AM