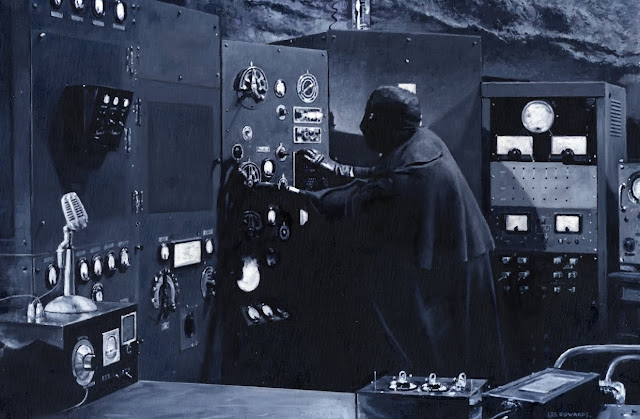 1) What was your first published work?
A cover for a book called Satanic Omnibus by Kurt Singer. It was a sample piece that I’d done depicting a skull with a lizard inside. I think it was done in coloured ink. The publisher decided it was appropriate for this book so I’d suddenly done my first horror cover and the first of many skull paintings. It was subsequently used on Demons by Daylight by Ramsey Campbell who is one of my favourite authors so I was chuffed to pieces.

2)Who or what inspires you?
Almost anything. I’m a bit of a sponge when it comes to influences. Books, movies, paintings, photos; you name it. Most things get stored away in some obscure vault in my brain for future reference but an idea can be kicked off by anything I see or read. What you hope for as an illustrator is a story that will get your juices flowing but if that’s not the case then you have to resort to scribbling down ideas in the hope that your subconscious will allow something to pop to the surface. I have to say that the process gets slower the older I get but strangely my brain works better with a pencil in my hand.

3)What would be your dream job?
Actually there are several. I’ve always wanted a bash at Michael Moorcock’s Elric. Unfortunately for me John Picacio has done a really fine version which would be hard to top. I hate that guy! Only joking. John’s a really nice chap. Still it would be good to give it a go, even though it would mean annoying legions of fans who think their image of Elric is the only possible one. Like painting Conan.
I’ve always fancied the idea of an illustrated Dr Jekyll and Mr Hyde but I’ve read the book loads of times and I just can’t get a handle on how to approach it. The big question is what do you do with Hyde? He’s not really described but it’s made clear that he’s not a monster in the visual sense, so how do you depict him as evil and repellent and stay true to the text? The old subconscious is still working on that one.
Luckily another dream job is one I’m currently working on, but I can’t tell you about it.

4)Tell us about the illustration you’ve sent.
It may seem a slightly strange choice. It’s not a commissioned piece but a personal painting called Remote Control. It’s based on an old movie serial. When I was a kid I was a big fan of the serials and I would rush home from the cinema and frantically try to draw scenes that I’d just seen on the screen. They often had a Science Fiction theme or a masked villain and I lapped them up. I’ve been meaning to do a series of paintings based on the serials for a long time but this is only the third one I’ve got round to. It’s probably not of much interest to anyone who doesn’t recall those movies but I’m very fond of them and they’re finally finding an expression in paint. Also it’s in black and white which I’ve recently found I thoroughly enjoy working in. Now the question is; Is there anyone out there sad enough to be able to identify the serial this painting is derived from?

5)What can we expect from you next?
I’ve just delivered the cover for A Book of Horrors edited by Steven Jones and published by Jo Fletcher Books an imprint of Quercus. Next up on the drawing board is a cover for the new Anne and Todd McCaffrey book, Dragon’s Time, which will be published in the USA by Del-Rey.

6)If you hadn’t been an artist what do you think you’d have ended up doing?
Who knows? At school I was into Science as well as Art, particularly Physics. Unfortunately, under our bizarre education system, I couldn’t study both and the truth is I didn’t have the necessary ability at maths to be a physicist. This was a time before calculators or computers. It would be nice to think I might have ended up working on the Large Hadron Collider but these days I barely know what a Hadron is. I really can’t imagine not drawing or painting in some way or other.

7)Where can we see more of your work?
At www.lesedwards.com and www.edwardmiller.co.uk
Posted by Graeme Neil Reid at 8:00 AM