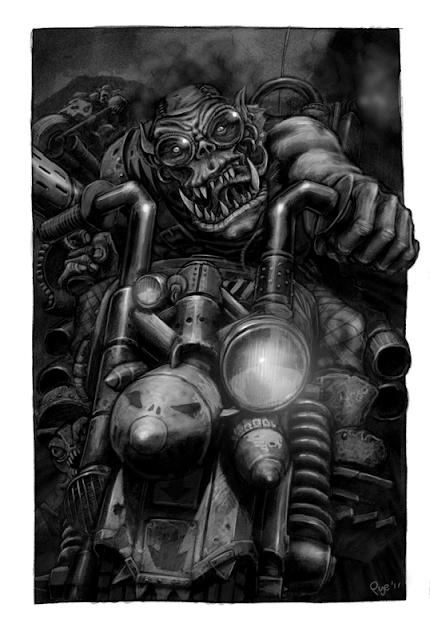 1) What was your first published work?
My first published art was a monthly illustration to go with a column about the joys, troubles and delicious ironies of being a radio control plane enthusiast for a niche hobby magazine called RC Model World. It was as great as it sounds. I also did illustrations for patchwork patterns in Patchwork & Quilting Monthly. Great days...
...Yes, I did hunt them out, no, you can't see them.

2) Who or what inspires you?
I love anything with a bit of humour or silliness in it. I bought a kid's book the other day called The Pirate Cruncher by Johnny Duddle, just cos of how fun the art was, which has made me want to have a go at something similar. I'm also going through a Paul Bonner re-obsession. I love all the story and character he gets into these epic paintings that could easily be horribly macho fantasy fare. I can thoroughly recommend his art book Out of The Forests - It's depressingly amazing! 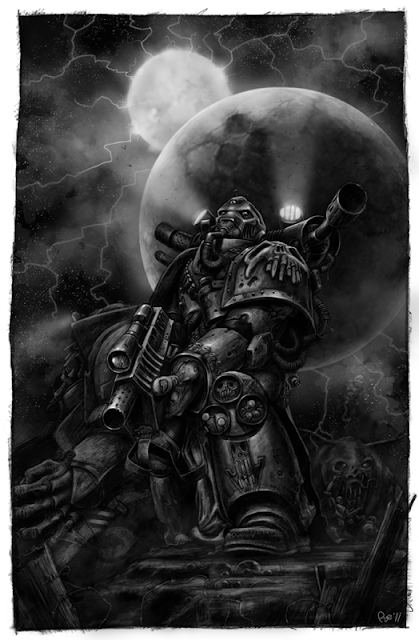 3) What would be your dream job to illustrate?
I like my day job, but getting paid enough for my drawings, comics and paintings that I could do it full-time would be a dream. I can see it now; Couple of hours on an oil painting in the morning, which turns out exactly as I imagined it would do, then a bacon sandwich and cup of tea. I read an email from Tharg saying he wants me to draw a 15 part epic based on death-race 2000 and mad max, then spend the afternoon drawing a picture of a 3-eyed minotaur fighting giant wasps on top of a volcano for some RPG book or something, followed by a sunny 1 hour drive to the pub down deserted roads in a Renault Alpine A110. In France. That's how every artist's life is, isn't it?

4) Tell us a bit about the illustration you've sent?
I'm currently building up a small portfolio of fantasy/sci-fi stuff to send out. I used to draw this kind of stuff non-stop when I was younger, but I've not tried any for ages. These are a few of the pictures I've done so far. I'm a Warhammer geek, so these are all pretty GW inspired, but for the next few I want to come up with stuff of my own. Perhaps bonk-eyed naked Frog-people fighting dog-beasts in a dank cave full of luminous mushrooms... Or that minotaur/wasp thing I just thought of...

5) What can we expect to see from you next (what are you working on)?
The next thing you'll see from me is the cover art for Al Ewing's next novel from Abaddon books called 'Pax Omega', which seems like its gonna be typically wierd and pulpy and great. Hopefully the cover will do it justice! Here's a preview of one of the (few) finished bits. 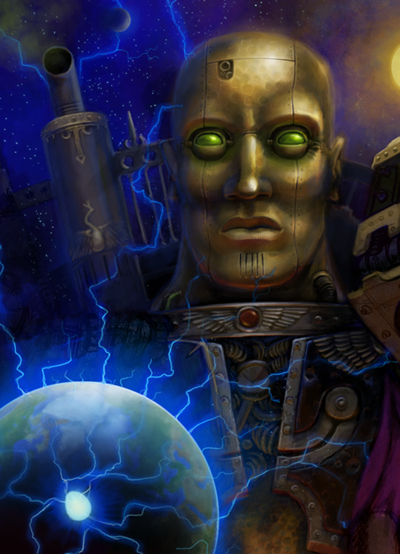 6) If you hadn't become an artist what do you think you'd have ended up doing?
Whenever I told careers advisors at school that I wanted to be an artist, they'd say: 'you can't, that's ridiculous - how about being a graphic designer', which always used to irritate me no end, and I resisted it for years. Now through the cruel machinations of the Gods I AM a graphic designer for most of the week, and I'm almost ashamed of how satisfying I find nicely laid out text, complimentary colours and matte laminate book jackets... If this ever falls through though, a career in rallying beckons. 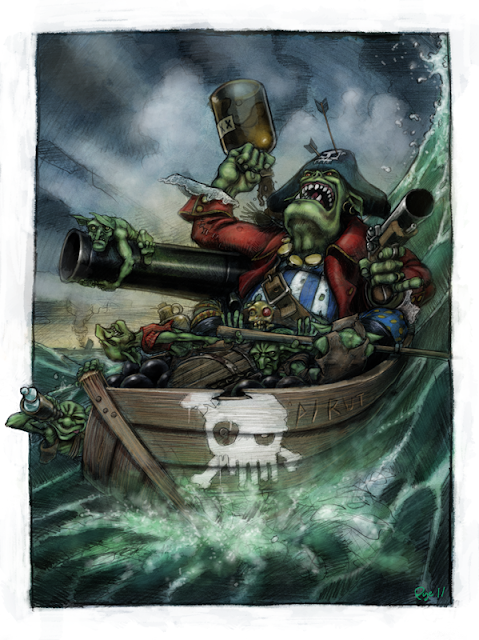 7) Where can we see more of your work (web links)?
My blog is at: http://pyeparr.blogspot.com
I also have a 'proper' site at www.pyeparr.com but that's still a bit work-in-progress.
Posted by Graeme Neil Reid at 8:00 AM