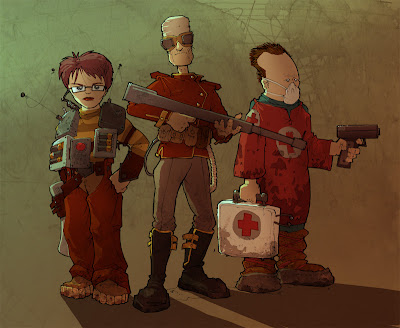 1) What was your first published work?
My artwork was always part of a larger project such as a product design, computer game or graphic design commission. So I've never really had artwork published before - at least not in the traditional sense. I worked on a computer game called "Isaac Newton's Gravity" a couple of years ago. Between us, Alex Ronald and I painted over 200 background images. I think it's the first time I've had 2D painted artwork published en masse.

2) Who or what inspires you?
I'm inspired by other artists mostly. I have this bookmark folder called "Great Artists" and, as I look at it now, it seems full of random styles. I like technical drawings: product renders, intricate cutaways, exploded diagrams and 3D renders. But equally I'm inspired by artists who can present a subject or an idea in a way that's completely original. There's not many of them about. 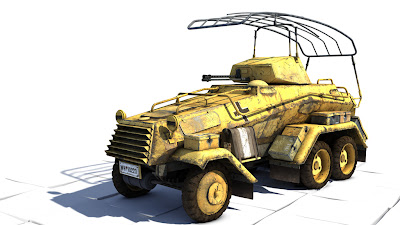 3) What would be your dream job to illustrate?
I'd love to be paid to do a huge technical drawing project. Some sort of engineering or product design task involving perspective, cutaways, renders and all that. I also love film concept art that involves vehicles, environments and props. That would be cool to do. There's also a Judge Dredd story that I've written. I'd like to illustrate this but it's 'unofficial' to say the least: it's an elseworld take on Dredd and his origins. 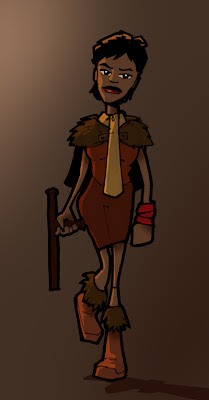 4) Tell us a bit about the illustration you've sent?
"threeHeroes" is a concept piece done while I worked at Outerlight. They'd had just finished making "The Ship" and were requiring concept artwork to accompany pitches to potential investors. They had a game idea involving a rag-tag group of space mercenaries. This was some of the characters.

"tank" was a personal project. I'd just turned freelance and bought Cinema4D. I made this image while teaching myself the software. I'm a lot more comfortable making inorganic things than I am characters or creatures.

"truncheonWoman" was a character from a short story I've written. It remains parked in my Google Docs and I intend to illustrate it..one day

"gearHouse" This is one of the images from the computer game "Isaac Newton's Gravity." It started as a rough 3D model in Maya and then it was painted over in Photoshop

5) What can we expect to see from you next (what are you working on)?
Professionally, I'm the Art Manager at Muvizu (formerly DA Group). Muvizu is a 3D character animation tool that hangs off the Unreal Engine and we're updating in a few weeks.
Privately, I'm working on a 3D render of a weird Isometric world inspired by Shaun Tan's book, "The Lost Thing" 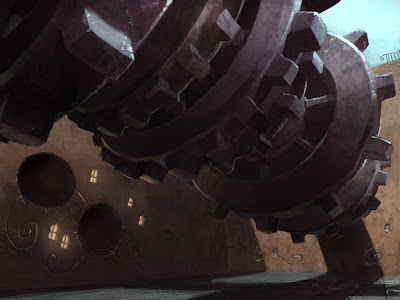 6) If you hadn't become an artist what do you think you'd have ended up doing?
An Engineer. I was one...once. I'd have probably still been there if I hadn't discovered Maya.

7) Where can we see more of your work (web links)?
My folio's online: www.barrysheridan.com
Posted by Graeme Neil Reid at 8:00 AM