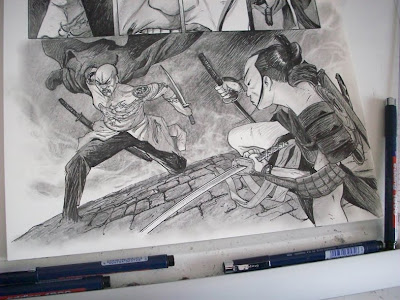 1) What was your first published work?
As a self-publisher my first work was Spirit of the Highwayman way back in the mid-eighties. I've always leaned towards a gothic style so the projects have been set in grim and gritty settings, such as victorian London or 17th century England. Whitechapel Freak was a one-shot spin on the Jack the Ripper mythos, printed as a tabloid newspaper it went down very well...not so well with the guys who like to store in comic bags though:) Springheeled Jack came next, this was based on a few snippets from a Penny Dreadful, my version was an actual alien which I thought would have a great visual 'punch' set against a victorian backdrop. Still waiting for Don Murphy to put his Transformers away and pick this idea up as a film.....mmm, I should start up a campaign/poll.

2) Who or what inspires you?
Personally Jack Kirby is the most inspiring artist to me. I remember shopping with my mum in the early 70s and the UK reprint of AVENGERS literally leapt off the newstand at me (for some reason our No.1 was the US's issue 4, the return of Captain America) and I've been pretty much hooked on comics ever since. When I cast my mind back to the sixties, how bland and 'black and white' it all seemed, I can't imagine where Kirby pulled all his ideas from. Ideas that are still as fresh today, being given new life in Dynamic Forces' KIRBY Genesis series, with help by today's modern master Alex Ross.

3) What would be your dream job to illustrate?
After all these years going it alone it would be great to get the opportunity to illustrate Batman, it must be set in a victorian playground though, I'd simply refuse to do it any other way;). Or I quite fancy having a stab at a Judge Death tale if one was to come my way.
The last couple of years I've been illustrating MADAM SAMURAI vols 1 & 2 created by Gael McLaughlin and written by Gary Young (writer of the hit film HARRY BROWN starring Michael Caine). Initially it was a film concept which has been bought to life in the form of two action-packed graphic novels.

4) Tell us a bit about the illustration you've sent?
The image accompanying this ramble is a portion from book 2 when it was still on the drawing board. Vol 2 will be out very soon, you can order it from July's PREVIEWS.

5) What can we expect to see from you next (what are you working on)?
I'm currently working on a short story for a horror mag called SPLITLIP, written by the netmag's editor Sam Costello. It's a bit on the gruesome side.

6) If you hadn't become an artist what do you think you'd have ended up doing?
I work in the newspaper industry as my full time job, so luckily I'm not reliant upon jobs from publishers, which is a good thing really, as the ONLY shot I had with an American comic (Chthulu Tales, Boom Studios) led to nothing as my style was considered 'Unusual'(?) so I'm still actually waiting to become a bonafide comic artist. Maybe one day.

7) Where can we see more of your work (web links)?
http://davehitchcock.blogspot.com/
http://www.madamsamurai.com/
Posted by Graeme Neil Reid at 8:00 AM