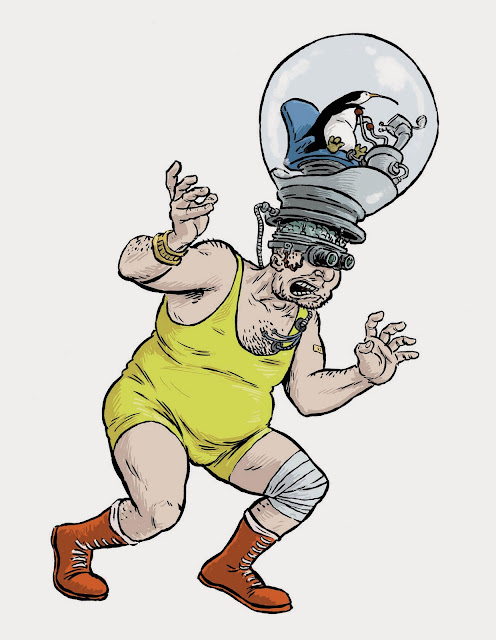 1) What was your first published work?
An editorial illustration in a long defunct computing magazine called Program Now. This would have been in about 1990, I think. A watercolour piece of, if my failing memory serves, a man with a big hole in his head looking at a computer printout. Can't remember what it all meant. Though I do remember the arms were a bit dodgy.

3) What would be your dream job to illustrate?
Character design work for Pixar would be fabulous. Otherwise I seem to be ambling closer to my dream job anyway. I'm mostly working on writing and drawing stories of my own these days with pretty minimal editorial interference (but very good editorial support). I just want to get better at that, really. And faster. I don't really have any hankering to be let loose on some iconic Marvel superhero or anything. I wouldn't know what to do with them.

4) Tell us a bit about the illustration you've sent?
This is a few years old now, and maybe rather unlike anything I've ever done professionally, but I always rather liked it. It was a character I drew for Sam Hiti's Fist A Cuffs site. Different cartoonists drew contestants for a mad wrestling tournament and each round was decided by voting in the comments section. I was really pleased with Bird Brain. Naturally he was knocked out in the first round. In retrospect, drawing him with a clearly injured knee probably wasn't doing his chances any favours...

5) What can we expect to see from you next (what are you working on)?
Probably the next thing to come out will be my debut non-comics children's book A Boy and a Bear in a Boat. It's all done now (after a long while) and comes out in January. I'm currently working on Good Dog, Bad Dog Book 2 (working title: The Big Screen), my contribution to the multi-creator Nelson project, edited by Rob Davis and Woodrow Phoenix, and some strips for The Phoenix (no relation - the DFC's zombie offspring) when it launches in (probably) January.

6) If you hadn't become an artist what do you think you'd have ended up doing?
I really don't know. I sometimes think that being a builder of drystone walls might have pleased me though. I worked part-time in a bookshop for nearly a decade and part of my job was sending returns back to the publishers. I got pretty darn good at fitting different-sized books together in the best possible fashion to fit them into the box. I figure dry stone walling would be the same kind of thing but on a bigger scale. With rocks. And outdoors. Probably in Scotland. Sounds all right.