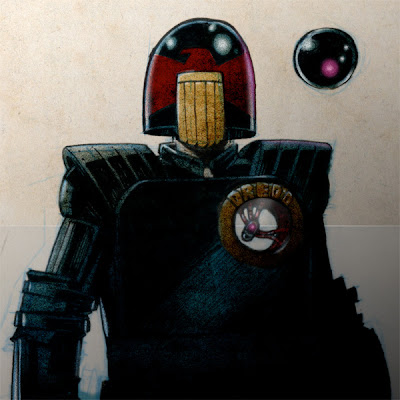 1) What was your first published work?
'The Enhancer', a Future Shock in 2000AD Prog 1270. It was loosely based on a self-published comic I wrote and drew in the 90s, inspired by Blade Runner and Jan Van Eyck's 'Arnolfini Portrait'.

2) Who or what inspires you?
Last year I did one of those 'influence maps' which shows some of the art that has affected me so far but right now my biggest inspiration has to be Ali Farzat, the Syrian political cartoonist whose hands were smashed by security forces last summer. This video interview is humbling and astonishing.

3) What would be your dream job to illustrate?
Hard to pick one! I still would LOVE to draw Dredd. That itch hasn't been scratched yet.
There are people I'd like to work with: I recently drew a Si Spurrier Time Twister and am desperate to do more with him, his scripts are a joy to read and I'm also a big fan of his crime novels. Rob Williams is another dream collaborator. Low Life and Ichabod Azrael are two massive 2000AD highlights.
I like adaptations too, I really enjoyed turning The Day Of The Triffids into a comic and would like to do more Wyndham, maybe The Kraken Wakes. MR James' The Mezzotint would work beautifully as a comic.

4) Tell us a bit about the illustration(s) you've sent?
That weird take on Judge Dredd is something I did for the Remake/Remodel challenge on the Whitechapel Forum. I just wanted to take the Judges' facelessness and heartlessness as far as I could.
The portraits of Ingrid Pitt were done for James (@themooks) Howard's Twitter project #drawHammer, celebrating Hammer Films. James had previously organised a #drawBatman and #drawHellboy which are also well worth a look.
The page below is from The Scarifyers #1 the first comic from Simon Barnard (which I had the pleasure of drawing) based on his popular audio adventures on BBC Radio. This page is one of the more sinister ones but the story is actually full of humour to offset the devil worship and mutilation. (PLUG: The Scarifyers #1 is on sale now online and at comic shops listed here! ) 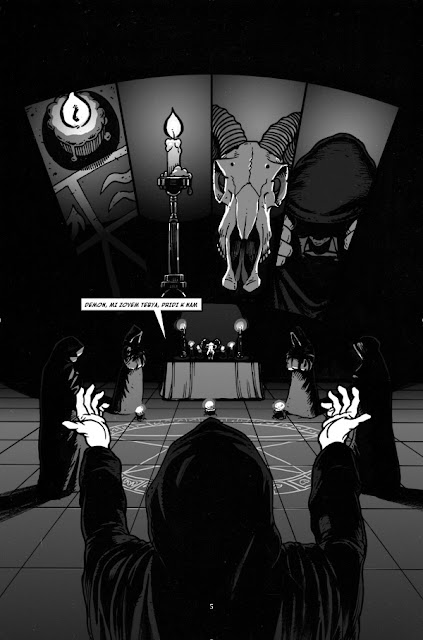 5) What can we expect to see from you next (what are you working on)?
Simon Barnard is busy writing the script for issue 2 of The Scarifyers. I want to get a couple of currently-out-of-print comics back where people can read them. I'm at the 'carrier bag full of ideas' stage of putting together my own collection of short stories. I recently read a rather brilliant children's book manuscript which I am dying to draw. All a bit vague at the moment, sorry! Speaking of children, if you're a CBEEBIES viewer you'll soon see new episodes of Abney & Teal, which I storyboarded.

6) If you hadn't become an artist what do you think you'd have ended up doing?
Ice cream man. It's the only non-art & design work I've done professionally.

7) Where can we see more of your work (web links)?
I wouldn't advise following me on Twitter, but if you do you'll be the first to hear about new work: http://twitter.com/#!/Gurroo
I try to update my blog fairly frequently: http://gurr.eu
Here's my tumblr of sketches and work-in-progress: http://gurroo.tumblr.com/archive
Illustration portfolio page: http://www.gurrillustration.com/portfolio/
Some examples of my comic work on Flickr: http://www.flickr.com/photos/simongurr/collections/72157613815032681/
Thanks for looking!
Posted by Graeme Neil Reid at 8:00 AM