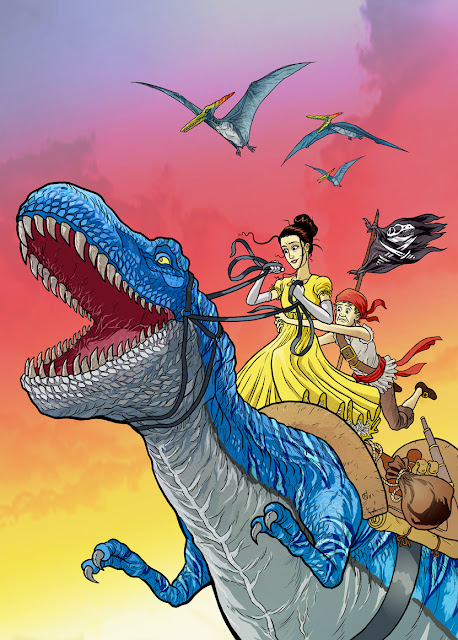 1) What was your first published work?
I *think* my first published work was in fact some Battle Beasts fan art sent to a Marvel UK comic when I was a kid. I have no recollection of this, but someone has pointed it out to me in adulthood so I guess I must believe them. (You may just possibly not remember Battle Beasts. They were like little fighting toy monsters, and they had holograms on, and when you pressed them they showed either Fire, or Water, or... something else. Earth? Anyway, it was like playing Paper Rock Scissors but with robot monsters. Yeah.)

Or in terms of proper, 'real', professionally published comics that I wrote and drew: I tend to count my book, Mo-Bot High. It's big, and colourful, and easy to point to. You should read it, it's pretty great. It has robots in.

2) Who or what inspires you?
Battle Beasts, obviously. Other than that…

Actually, you know what, that was a faecetious answer but I'm going to go with it. I find inspiration in all sorts of things - art, music, filims, books - but if there's one thing that seems to really resonate with me and form a kind of running thread through my work, it can basically be summed up as Stuff I Was Into When I Was Ten. You know, giant robots that turn into things, dinosaurs, ninjas... that sort of thing. Battle Beasts, in short. 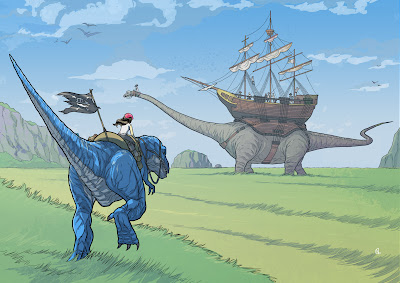 3) What would be your dream job to illustrate?
A comic about pirates riding round on the backs of dinosaurs. Hey wait that IS my job. (I am, at the moment, an incredibly fortunate man.)

4) Tell us a bit about the illustration(s) you've sent?
I've sent through a couple of bits of cover art from The Phoenix, the weekly children's comic that I am currently engaged in producing silliness for. One is from The Pirates of Pangaea, the aforementioned pirates-riding-round-on-dinosaurs comic, written by my buddy Dan Hartwell, which ran in the first 20 issues of the Phoenix and on which we are currently hard at work beavering away producing future instalments. 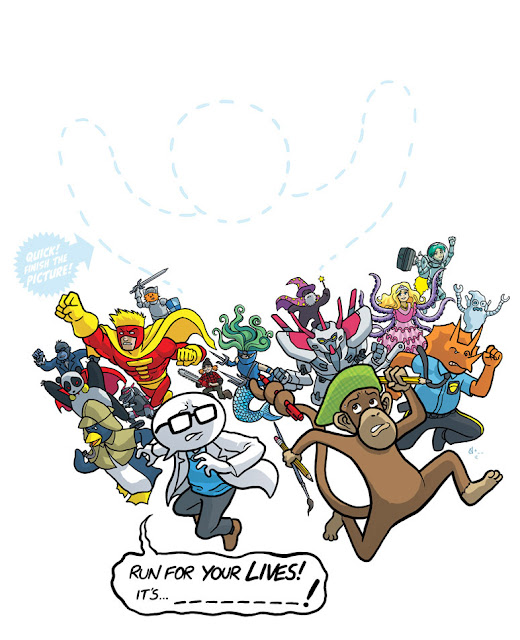 The second is from my other strip, How To Make (Awesome) Comics, which is... well, it's pretty much exactly what it sounds like. It's one page a week that's a bit Scott McCloud, a bit Robert McKee, and a bit just silly nonsense about ninja mermaids and farting cats and suchlike. It's my attempt to pass on a bit of the fun and excitement that Saturday mornings always gave me as a kid; getting and reading the week's comics was always amazing but it was just the beginning; a launching point into the REAL fun of carrying on and drawing your own. That's one of the really amazing things about comics, and it's something I'm increasingly banging on about - they're a fantastic way to get kids reading, but they're so much more than that: they're a fantastic way to get kids reading and writing and drawing, using all different bits of their brains in one fantastic soup of excitement and creativity.

This image in particular is something I was really excited to try: I drew half the cover and then left a blank space for the comic's readers to get their felt tips out and finish it off by drawing their own monster / robot / whatever took their fancy. At the time of writing the issue in question has been out for a few days and the response has already been completely fantastic.

5) What can we expect to see from you next (what are you working on)?
More Phoenix stuff! More Pirates of Pangaea, more How To Make... and I've written and/or illustrated a couple of other really fun one-off strips that will be appearing in the coming months and weeks.

6) If you hadn't become an artist what do you think you'd have ended up doing?
Absolutely no idea. Possibly doing what I was doing *before* I became an artist, which was: working in software, making much better money, hating every second of life.

Please do subscribe, or pass on to any kids you know who may need some awesome comics in their life.

And if you'll allow me to say this, seeing as I'm here in Scotch Corner: if you run, or work in, or know a comics shop / bookshop in Scotland that might be interested in stocking the Phoenix, please do encourage them to contact ross@thephoenixcomic.co.uk. There's a giant, Scotland-shaped gap on the map of Phoenix stockists and it pains me every time I look at it.

Apologies for turning into a plug at the end there, but the Phoenix is something I'm hugely proud of and genuinely believe in, and it makes me come over a bit evangelical. Thank you for your time.
Posted by Graeme Neil Reid at 8:00 AM