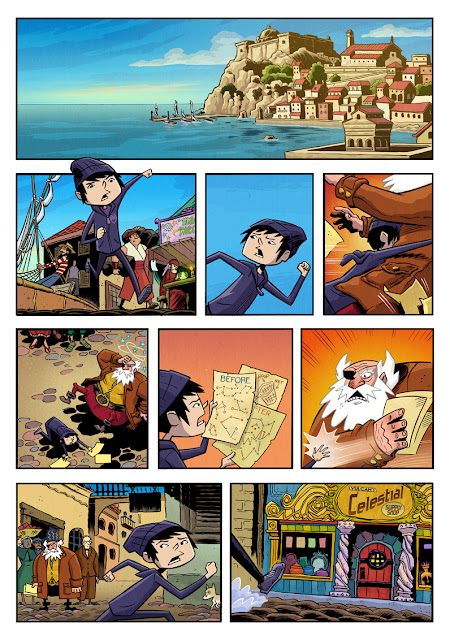 1) What was your first published work?
I started working professionally sometime around 1992, when Bob Layton hired me as a colorist at Valiant Comics. So my first published work would be some of those monthly comics, in my case it might have been a few pages of "Magnus, Robot Fighter." But, in 2005, I adapted, penciled, and inked a 144-page version of "The Wizard of Oz" for Penguin Books. Since that was the first project I drew (rather than colored), I tend to think of that as my first published book.

2) Who or what inspires you?
The 80's creator-owned comics like Scott McCloud's "ZOT!" and the Hernandez Brothers' "Love & Rockets" were huge early inspirations for me. I read those and a lot of other comics as they were coming out, and they're what made me want to learn more about art and become a cartoonist. Music was also always a big motivator for me. I spent a lot of time playing in bands, making our own records, booking our own tours, etc. Making your own comics is sort of different, but not that different.

3) What would be your dream job to illustrate?
I'd love nothing more than to make a living drawing my own stories. I like the challenge of adapting my style to a preexisting thing, like the "Ben 10", "Generator Rex", "Superman" or "Batman" books that I've done, but if I could just do my own stuff, that would be great.

4) Tell us a bit about the illustration(s) you've sent?
This is the first page of "Nico Bravo and the Celestial Supply Shop", a story I created for The Phoenix Comic, a weekly all-ages comics magazine published in the U.K. Nico lives in a tiny island village where he works at Vulcan's Celestial Supply Shop, a peculiar store where the gods of different pantheons the world over come to buy the specialty items they need to go about their business as supreme beings. Naturally, the clientele and the merchandise provide Nico with an endless opportunity for adventure.

5) What can we expect to see from you next (what are you working on)?
I'm just starting a graphic novel with playwright Adam Rapp called "Decelerate Blue", a bit of dark futurism where the pressure to accelerate our lives has reached a breaking point. That's for First Second Books. I'm hoping to do more "Nico Bravo", and I'm doing a few "Superman" and "Batman" books for a publisher called Capstone. I've also got a record coming out. It's at the pressing plant right now. I recorded it about 15 years ago with my band in a basement in Pennsylvania, but then we never released it. It's fast, noisy, messy punk rock. I have no idea if it's aged well, but the folks at Psychic Volt Records decided they had money to burn, so I let them. Here's a link: http://psychicvolt.com/johnny-x-and-the-conspiracy-st-lp/

6) If you hadn't become an artist what do you think you'd have ended up doing?
I'd be the ruler of a totalitarian utopia.

7) Where can we see more of your work (web links)?
www.mikecavallaro.com