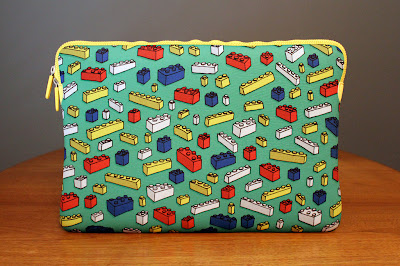 1) What was your first published work?
My work first appeared on caseable.com which is a service which adds your artwork to various device cases (laptop/ipad cases, phone covers etc). I uploaded my artwork for a laptop case and won a competition on their site, from here I was made a featured artist.

2) Who or what inspires you?
I find inspiration everywhere, music, books, tv or even just a wander. Twitter has been a great resource for inspiration. There are so many great artists/illustrators out there and It's great to see their process and ideas develop start to finish. 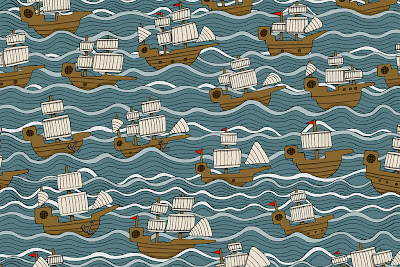 4) Tell us a bit about the illustration(s) you've sent?
(top) This is my Lego laptop case which started the ball rolling. I'm always sitting drawing or doodling and had made the piece up just as something to do on a rather long journey + quite a lazy weekend, I love Lego...probably too much. It was from here I developed the designs further to be continuous and seamlessly repeat which takes us to (middle pic) trade winds. With every new bit of work I try to take it a step further and push myself. My work is all hand drawn, I love stepping away from the computer it's too easy to get distracted at a machine.

(bottom pic) The last image is some character work for a collaborative twitter brief called "Colonel Windpipe's Musical Brigade" a completely open ended brief to design characters to march in the band. Lots of great illustrators were involved and it turned out to be a lot of fun and a great little exercise in character design.

5) What can we expect to see from you next (what are you working on)?
At the moment I'm working on these large repeat patterns which I have just had printed onto fabric. Originally I had planned to turn these into wrapping paper but they look amazing on fabric and people seemed really keen to incorporate my designs in their creations, which is much better than just throwing them in the bin.
Also I'm working with some talented developers illustrating mobile games which is shaping up nicely. 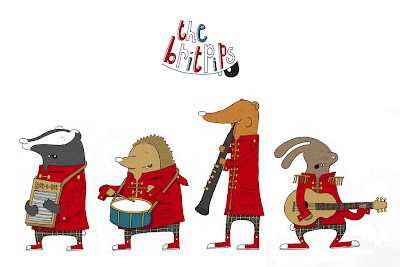 6) If you hadn't become an artist what do you think you'd have ended up doing?
I can't imagine doing something that isn't creative, I would love to work with wood making toys or figures. I think I like the idea of a workshop rather than a studio. Somewhere I can make a proper mess and actually put tools down at the end of the day. Being an animator I spend a lot of my day stuck in front of a computer so I would like to be a bit more hands on in making things.

7) Where can we see more of your work (web links)?
My blog tends to have the most activity and be up to date www.bitsofbobs.com
My portfolio www.bitsofbobs.co.uk
My flickr http://www.flickr.com/photos/bitsofbobs/
If that isn't enough you can find me on twitter www.twitter.com/bitsofbobs
Posted by Graeme Neil Reid at 8:00 AM