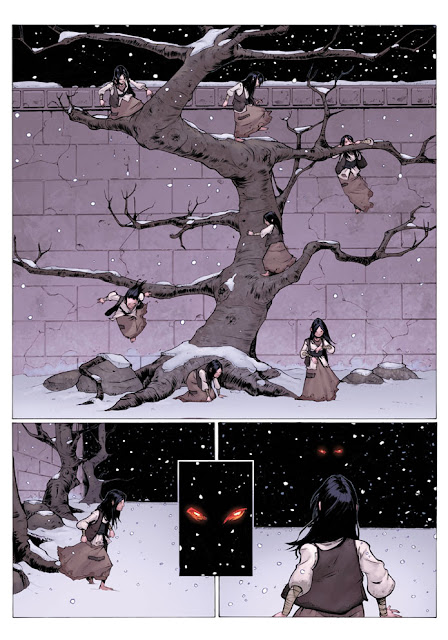 1) What was your first published work?
My first published piece was True Grit: Mean Buisness 2010, its was the official tie in comic to promote the Coen Brother’s film. I landed that by a pure luck of the draw. The right person at the right time came across a sketch I had posted on my blog after seeing the trailer and asked me if I would submit some sketches for a possible comic promo of the film. That was a bit of a crazy first experience.

2) Who or what inspires you?
Cripes, a lot! I’m by no means comfortable enough in my skills to not have some form of reference on my table, i find myself constantly looking to the likes of Dylan Teague, Sara Pichelli, Ramon Perez, Cameron Stuart and Sean Murphy to show me how to do things right when I have doubts. They all have a very different style and all have a completely different energy in their work which I think is important in comics, I’m still new to the game so I’m still learning but one thing that shines through on all of the great artists is that they all have some energy and passion that shows in the work.

3) What would be your dream job to illustrate?
Ultimate Spider-Man, I love Spidey and especially teenage Spidey, there’s a lot of fun going on in there and I love the banter, if I could be any super-hero it would be him but… This sounds like complete cornballs but the book I’m on at the moment (Porcelain) is completely what I want to draw, I get a lot of freedom and its set in a world we’ve only just started to explore, it’s dark, harsh and beautiful and has a lot of room for more creation, if I could stay working on this book and world for the rest of my life I would be very happy! 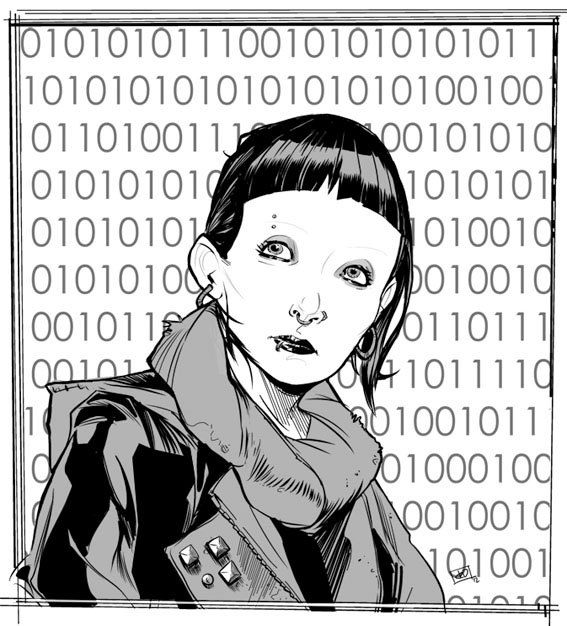 4) Tell us a bit about the illustration(s) you've sent?
The first is a page of Porcelain, the comic I’m currently working on and will be the first released through our Improper Books imprint. I’m very happy with this project. Ben and I have worked hard on this project and thought out so much for the world they are in and we’ve really tried to make this our own and have put a lot of love into it. I’m very attached to the two main character and I think other people will be too. Ben has written a beautiful tale about them so I cant wait to see what people think when it’s done! Also I have to show of Andre’s (the colourists) work, Andre has given the book a whole other feel and we would have a completely different feel to the book without him. The second is a Sketch I’ve recently drawn of Lisbeth Salander from ‘The Girl With The Dragon Tattoo’ I love to sketch characters that dig deep into my inspiration, she’s one of them, I’ll often draw a character after watching a film or think up some short strip id love to draw of them just for the sake of drawing them. I’ll often post such sketches on my blog.

5) What can we expect to see from you next (what are you working on)?
Through Improper Books I’ve got two projects in the works, first is Porcelain which is due out in November then it should shortly be followed by Butterfly Gate which will be an ongoing series. (both written by Benjamin Read) I’m also working on a graphic novel called Dream Solver written by Luke Foster which is due out with Markosia late in the year.

6) If you hadn't become an artist what do you think you'd have ended up doing?
Working on films in some form of prop department, My eldest brother works in films as an armourer and I have been lucky enough to help out on a good few films and stage shows so I think If I couldn’t draw I’d just love to be working on set and making all kinds of crazy props.

7) Where can we see more of your work (web links)?
You could check out my blog www.christianwildgoose.blogspot.com
Follow me on twitter @MrRiktus (I post a lot of sketches and process pics on there)
Or check out our new and shiny Improper Books site www.improperbooks.com
Posted by Graeme Neil Reid at 8:00 AM