Elena Kurakin in a fur bikini

So I've finally had time to do a few of those commissions that have been stacking up ( sorry for the delay ). This is Elena Kurakin , Nikolai Dante's right hand woman and best friend. She is wearing the fur bikini that Messrs Morrison & Burns came up with in one of the episodes set in the House of Sin. Send all your 'bearskin' and bush jokes to them. To all those who griped that I never drew Elena sexy enough, here's where you get what you want. For the record I didn't draw Elena deliberately unsexy, it's just that as a character she was intensely practical and didn't choose to express herself in that way. There were plenty of feminine characters in the story, Elena had other priorities. Perhaps that's one of the reasons why Dante respected her so much.
I've included the pencil here too, because I like it. 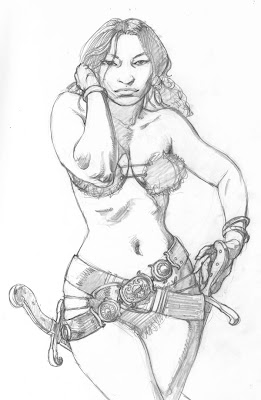 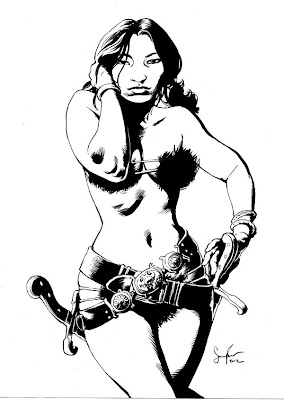 Incidentally if you've been waiting for a commission from me then it might be a good idea to gently remind me about it. I'll be contacting those who I have on my list, but my list is likely to be somewhat flawed. Thank you for your patience.