Occasionally I use photo reference for my work (mostly for tricky fight choreography or character designs) and it proved especially helpful for Dan Dare. Garth Ennis had written a very subtle opening sequence and since this was the first look at Dan Dare for near fifteen years or so there was a certain worry about getting it right for the fans (old and new)

My partner Mhairi took the photos of me in similar poses to my initial sketches. It's always important to sketch the layouts first but sometimes you surprise yourself with a different angle and better storytelling. Best to go with it if that happens. Various pieces of reference (dogs, small village and cricket match) were found on the internet (a valuable and quick resource for any artist and script!) A few changes were made to the sequence in the final edit and inks but the end result is one I am very pleased with. 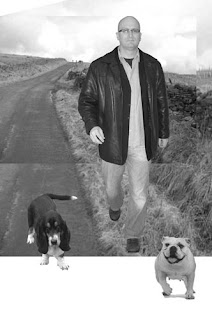 Here's the process for Dare... After the photo reference pictures are comped together I can start the pencilling process. This is generally done with pen as it gives me a first draft at the inks and I can sort out any problems there and then. 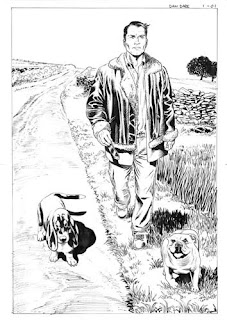 Once I am finished with the pencils then onto inks. Lots more detail and texture is added to the final picture. You will notice the birds in the background (a late addition to the script) 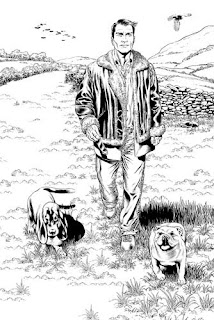 Once the inks are done then the final image is sent off to the colourist and returned as shown below. Absolutely gorgeous painted work by Parasuraman. 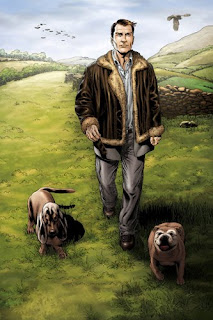 For Dare, the photo reference was also an essential part of the process to kick start me back into drawing for the already forward schedule. I was brought into the project later in the day and had to make up the time for an already agreed publishing date with Virgin. Hadn't drawn my own artwork for a couple of years so was a tad rusty and concerned that I had to catch up again on such an important book and character (the Dare Legacy carries a lot of weight) Impressing Garth Ennis was also not an easy task and we worked hard on this book.

I eventually got into my stride and the later issues were all drawn by hand (although there were still a couple of small sequences that required photo referencing) Very pleased with the end result and the Dynamite collection has more sketches and designs if you're interested in seeing another small part of the whole process of creating comics.
Posted by Gary Erskine at 9:58 AM