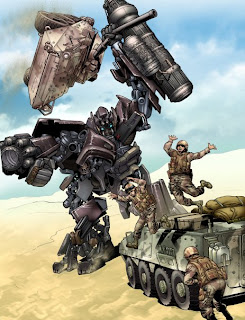 Occasionally I get the opportunity to work on some really cool toy licences and film related properties. The most recent (and fun) has to be the Transformers series for Titan Books. Have included a cover from last year of Ironhide smiting some poor soldiers (in the wrong place at the wrong time) Ironhide is probably my favourite of the new movie designed Transformers. Nice porportions to him and some cool artillery on those shoulders.

I would normally work through a variety of sketches for my editor Steve White, trying out different angles and compositions of Ironhide and the figures and vehicles. My brief was simple but specific (as it had to relate to the interior art and story) Not as restricting as you might think but thankfully the tanks were easily referenced and the desert background wasn't too much of a worry either.

Editorially there were a couple of subtle changes of tone (mainly with the soldiers jumping from the tank and those attacking Ironhide) Once the inks have been approved (see below) then it gets sent off for colour. For this piece I choose Chris Sotomayor (who I had previously worked with at Marvel) for the job. He had shown a good range and variety of styles on the Zemo: Born Better series I inked with Tom Grummett previously and was perfectly suited to colour this image. The detail he put into the finished cover was astounding but didn't over-power the main image. The scuff marks on Ironhide's feet and scrapes on his armour in particular (check the door edges) were lovely. It's that attention to detail that heps the overall finished cover work and I am really pleased with the end result.

For the Titan Books release they included the cover as a centre spread and it was a treat to see it properly (without logo, free toy and blurb) 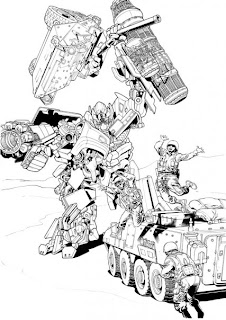