It's Goodnight from me

Today is my last on Scotch Corner, (no cheering at the back there)
Since this is my last day, I thought I'd do something slightly different. My newest image from Vampire Vixens and the oldest drawing I still have.

This latest shot from Vixens has our heroes on-route to Germany in an RAF Lancaster. Needless to say our coquettish vamp is pressing the Chaplain's buttons and he really doesn't like it. 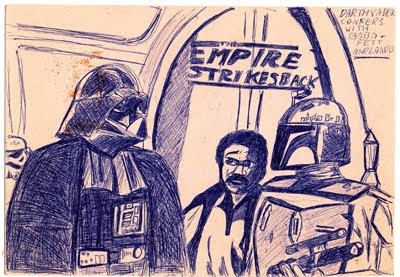 I've got a folder stuffed with old art sketches from school. and this is one of the oldest I still have. I was about 11 when I did this and as you can imagine back in the late 70's /early 80's, Star Wars was everything. I'm pretty sure I copied this pic from an image within the Empire novel which had a photo section when It was first published. I stupidly read the book before I saw the film and discovered the shock Vader/Luke revelation that way rather than on screen.

All that remains is to say thanks to Graeme for giving me a shot at the blog for the last couple of years, best wishes to fellow bloggers, Simon, Gary, Jon, Andy and Thomas, some of the best bunch of Scottish artists I've had the pleasure of sharing a blog with and best wishes to the Scotch Corner viewers for a Merry Christmas and a great 2013.