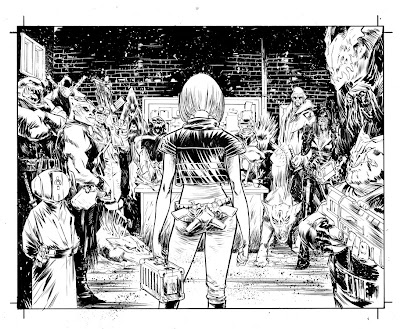 1) What was your first published work?
It was in an issue of Fathom, from Aspen comics. I drew 8 pages in the latter half of issue 4, which came out late last year. And then I went and bought tons of copies when it came out, like I suspect a lot of people do with their first published stuff. Seeing my stuff in print is still petty surreal, but nothing compares to that first time. 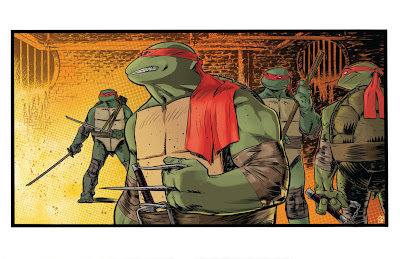 2) Who or what inspires you?
I think stories really inspire me more than anything. Nothing gets me excited like drawing from a good script, no matter the subject. I don't know if that's informed by my bent towards comics or if it influences my bent towards comics, but I've always been more into storytelling than creating art. Luckily, they go hand in hand in comics, so it's where I'm most at home. Storytelling is something that works it's way into whatever I'm doing whether I realize it or not. I'm always trying to slip subconscious clues about character, history, environment, etc into my art, and that's kind of the nature of comics. Showing, not telling, and figuring out new and interesting ways to do that.
I'm also really inspired by SO MANY other artists' work. There's a weird mix of intimidation and pride that bubbles up when I see a piece that stops me dead in my tracks. Part "I can't do that, I'll never be that good..." and part "I'm going to blow the doors off of this!" I think ultimately I'm just striving to recreate the feelings I get when I see something awesome. To pass along the inspiration if I can. 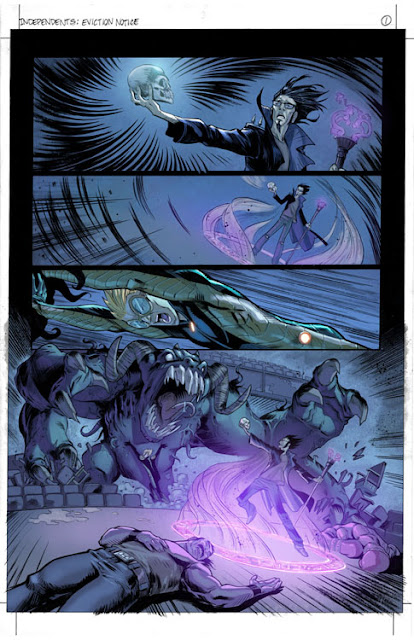 3) What would be your dream job to illustrate?
I have so many. I want to draw EVERYTHING. I'd love to have a career like John Romita Jr or Stuart Immonen. Those guys are great at everything because they've pretty much drawn everything there is. I want to dip my toe into every genre, character, and universe comics has to offer because I want to be good at drawing it all. Furthermore, I have a few stories of my own that I'd kill to be able to work on someday when time and money allows me. And if I don't get to draw a TMNT book before I die then I've truly failed. 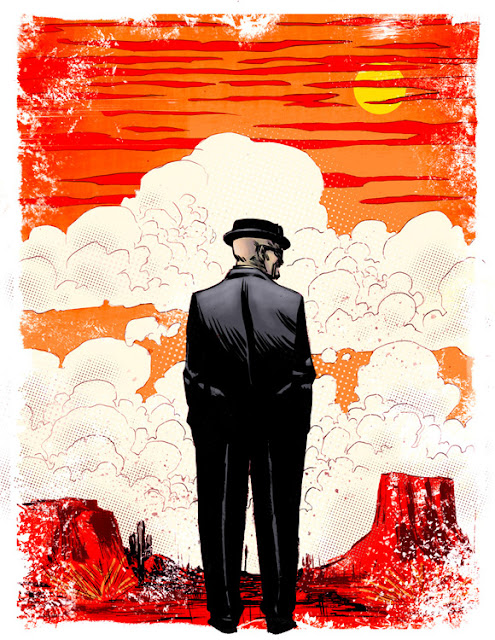 4) Tell us a bit about the illustration(s) you've sent?
1-The first is a piece I made as kind of a test for one of the stories I'm writing for myself. It's called The Package, and it's about a thief named Ember and her adventure as she delivers a stolen item to its buyer. It'll be a 12 page short, and I'm batting around ideas for format right now. I love print comics, but the advent of digital has opened up so many possibilities from a creative and distribution standpoint, so I'm really looking to take advantage of that with any stuff I self publish.
2-Next is a TMNT piece I did to make a print of for this year's NYCC.
3-Next up is a page from The Independents, a creator owned book I work on with my pal, writer Ben Christian. This page is from a story called Eviction Notice, and it's currently being colored by an incredible talent named Fabian Cobos. This story will be published in 2013 by the fine folks at 4 Star Studios through Double Feature Comics.
4-The next one is some Breaking Bad fanart. God I love that show.
5-This is a Black Panther piece I did for fun to experiment with inking and inkwashes.  I'd love to work inkwashes into my comic pages in a way that isn't so time consuming.
6-A double page spread from Broken Pieces, an Aspen series I just finished illustrating. I drew the last 3 issues of the miniseries, 3-5, and issue 5 should be out soon.
7-The Celestials card set. A while back I was doing sketch cards as a daily exercise, using brushes and pens and Copic markers, and I chose to do characters created by Jack Kirby. Kirby's design sense and overall aesthetic are so strong that much of the foundations he laid in the Marvel and DC universes are still around. He developed so many beloved characters' iconic looks, and in many case more than just their looks... I drew over 180 of Jack's characters for these cards, and they were a blast. There's a link to the gallery of all of them on my blog.

5) What can we expect to see from you next (what are you working on)?
Right now I'm drawing a new series for Aspen called The Legend Of The Shadow Clan. The first issue will be out in February. Working with the guys at Aspen has been such a great experience and this book is right up my alley with ninjas and mysteries and whatnot, so I'm loving it. I've also got that Independents story coming out soon, and a few more things I can't really talk about just yet. The bottom line is that I'm busier than I've ever been! 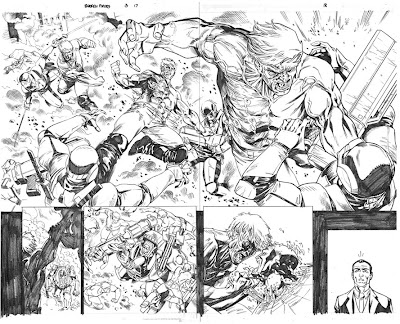 6) If you hadn't become an artist what do you think you'd have ended up doing?
This answer feels like kind of a copout, but probably an architect or engineer or something like that. Something creative where I would work with my hands. I really can't imagine myself doing something that didn't involve some kind of building or creating at a base level. I'd be completely lost without the outlet.

7) Where can we see more of your work (web links)?
My blog is pretty much home base for me: csmithart.blogspot.com. I post most all my work up there, and you can also find links to Tumblr (http://csmithart.tumblr.com/), DeviantArt (http://csmithart.deviantart.com/), and Twitter (http://twitter.com/_corysmith_)
Posted by Graeme Neil Reid at 8:00 AM