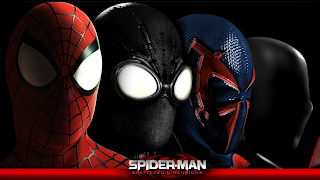 Occasionally I get the opportunity to work on storyboards for AXIS Animation for game trailers and cut scenes within games. This is certainly a fun departure from the normal day to day comic work and teaching. Most of the time we work under Non Disclosure Agreements while the project is scheduled. This proves quiet frsutrating at times when all you want to do is scream and shout at the wonderful work that the studio is doing.

For my part, I am brought in at the start of the project to work up the boards with the director from the client's script, sorting through story-telling problems or technical restrictions ('no rain!') and generally refining it to a point where the animation team (with riggers and modellers) can get underway. Occasionally there will be a call back for last minute changes but that is very rare as most of the potential problems are dealt with at the initial session.

The released end product provides a strange sense of deja-vu for me. Yes, the scenes and compositions are mostly what I decided on and supplied to the director but the polish, texture and movement work by AXIS Animation studio really brings life to the scene and a finish I could only have dreamed of!

For last year's Spiderman: Shattered Dimensions game I was aksed to work on the opening scene and following in -game cut scenes. The game was released to critical success and a sequel is underway. See if you can spot the Glasgow Kelvingrove referenced museum interiors with Mysterio.

Here is the trailer for the Spiderman: Shattered Dimensions game. Take time to explore the rest of the AXIS Animation studio work. Some talented directors, producers, modellers and animators there!