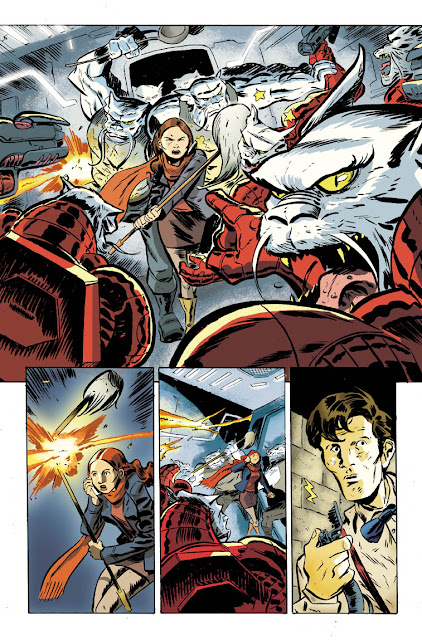 1) What was your first published work?
I've done a bit of fanzine and self-published work - which I would really recommend to anyone as a way of honing your craft, getting used to the pros and cons of the job etc. - but my first paid work was doing illustrations for the (now sadly defunct) Doctor Who Yearbook. I have a page from that framed on my mantelpiece. It's a few years old now, but I'm still terribly proud of it. Gareth Roberts - who's done a load of telly Doctor Who - wrote the perfect story for me - gleaming futuristic cities, flying taxis, turtles with jetpacks. Brilliant.

2) Who or what inspires you?
When I was very young, probably Jim Mooney and John Romita Jr. That’s who was drawing Spider-Man when I was a kid, and man was I crazy for Spider-Man. Marvel Grandreams would also reprint stuff from before I was born in their big, hardback annuals, so I would read Romita Sr and Gil Kane doing those early Kraven the Hunter stories and the Death of Gwen Stacey, stuff like that. And there was a Superman annual – I just picked it up again on eBay – by Jim Starlin, where Superman and Supergirl fight Mongul, and Supergirl ends up flying so fast she flies out of reality, past the bounds of life and into the realm of, well… God. And Superman flies after her, but the Spectre stands in his way. Beyond this point, mortal man was not meant to see. But Superman – who, reading back now, was kind of a pushy, arrogant idiot, forces the point, gets past the Spectre and goes mad when he sees the Universe for the Moebius strip it actually is. Then God Himself turns up as a huge flash of light and tells the Man of Steel to watch his bloody step from now on. At the risk of coming over all Grant Morrison, there’s something elemental and Promethean about that story, and it scared the crap out of me as a kid. It still scares me now, a bit.

Then in the nineties I got into the Image style of doing things. There’s a whole load of art from that time where I’ve just gone mental with the cross-hatching without really thinking about what was supposed to go under it. Awful. Then I discovered Bruce Timm, Alex Toth and Jack Kirby at about the same time, which brings more or less to where I am now.

Alternative, romantic answer: the missus. Seriously though, she puts up with an awful lot of rubbish from me – mainly my extravagant moodswings, all the way from vainglorious boasting to crippling ennui – and keeps pushing me to keep going on, to keep reaching for what I want. I’m not saying I’d be lost without her, but I’d probably be doodling cocks for cash in grotty hotel rooms.

3) What would be your dream job to illustrate?
I've kind of already done it - I've been a Doctor Who fan since I was ten or so, so all my life I've been drawing TARDISes, Daleks, Cybermen. And I'm also a Kirby nut, and I've kind of got to do that as well with Jersey Gods. So with those more or less ticked off, my dream job now is just to work with great writers making cool stuff. And maybe write something of my own. 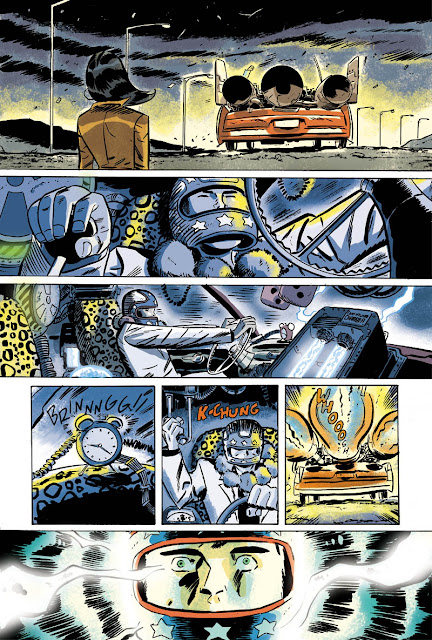 4) Tell us a bit about the illustration you've sent?
These are a few pieces of Doctor Who art I’ve done over the last few months, a couple for American publisher IDW and one for Panini. I’m never going to tire of working on Who, I think, it’s always going to fascinate me, even when I’m ancient and doddery. That’s probably a bit sad, isn’t it? And then there’s something from a more-or-less secret project I’m working on AS WE SPEAK.

5) What can we expect to see from you next (what are you working on)?
I’m working on a couple of projects with the fine folk of Oni Press; one, a kind of freewheeling, picaresque, Hitchhikers’ Guide-ish adventure, and the other a more serious-minded prestige hardback kind of thing with a couple of incredible writers (one of whom is pretty bloody huge, though in a different field altogether). And I think there might some Elephantmen in my future as well. 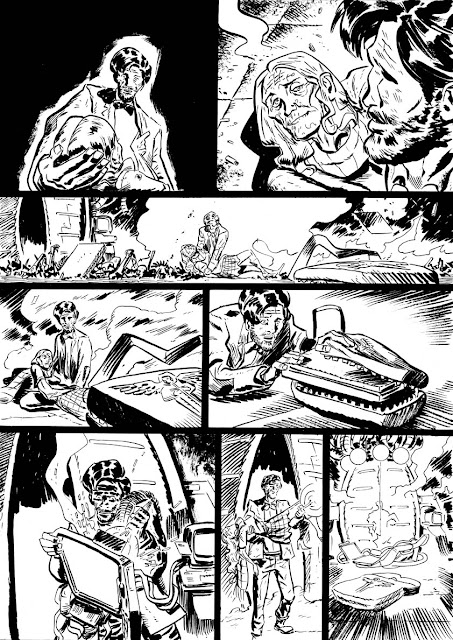 6) If you hadn't become an artist what do you think you'd have ended up doing?
Question does not compute. Honestly, it’s this or death.