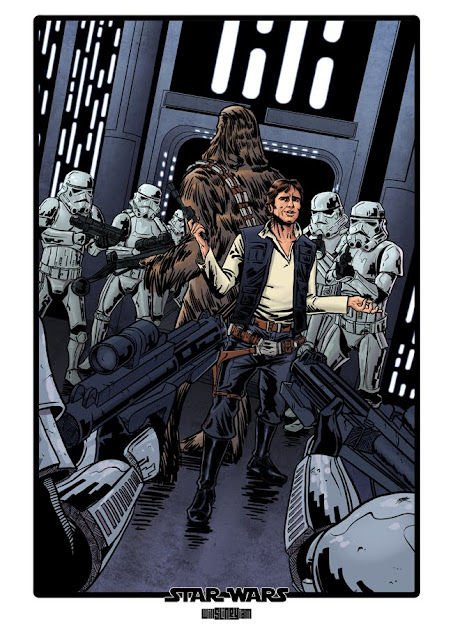 2) Who or what inspires you?
In comics, what inspires me is the potential to create huge universes that other creators can then play in and create more.
Illustration wise I pretty much draw up all my inspiration from comic book artists. I love discovering a new artist that I hadn't paid much attention to before, collecting as much of their work as I can find, then studying it for hour on end.

3) What would be your dream job to illustrate?
Spider-man. A big, rip-roaring 24 issue epic. I would love to get to draw one Giant volume of all the Star Wars movies too. (Both perhaps a bit too epic but hey you said dream job right?)

4) Tell us a bit about the illustration you've sent?
Its one of my Star Wars pieces that I did when I tied down my first Star Wars gig. I plan on doing a pinup of every character from the movies over the years.

5) What can we expect to see from you next (what are you working on)?
I cant say unfortunately. I'm working on my first creator owned book which will be a large Irish epic Tale. I have a number of other projects about to be announced too. One for IDW, finishing up Farscape for Boom Studios and a second creator owned book.

6) If you hadn't become an artist what do you think you'd have ended up doing?
Hmm, does that include computer graphics? I very nearly went down the Engineering route. (Thankfully with the Recession in Ireland now, I didnt). Maybe Architecture. I would imagine if it was'nt creative I would get bored.

7) Where can we see more of your work (web links)?
Your father site (Just kidding) http://eclecticmicks.blogspot.com/ and my own blog http://sliney.blogspot.com/
Posted by Graeme Neil Reid at 8:00 AM