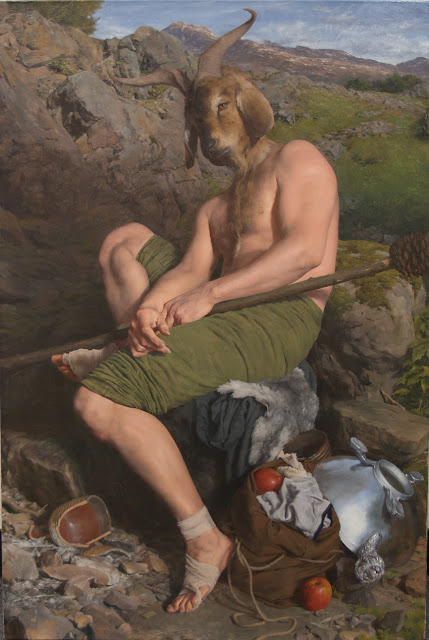 1) What was your first published work?
My work was featured in Art Review magazine in November,1998, shortly after graduation. I had my first solo exhibitions the year after in Aberdeen and then in Edinburgh. I don't often do two shows a year these days!

2) Who or what inspires you?
This could be a very long list! The most obvious inspiration for my paintings comes from studying the Old Masters. My favourites are Velazquez, Rubens, Titian and Gericault. When I first had ambitions to become an artist, however, it was in comics that my interests lay. 2000AD and the artists of that period were my inspiration. Brian Bolland, Simon Bisley, Glenn Fabry and Colin MacNeil were the ones I most admired. I vividly remember seeing a demonstration by Colin MacNeil in Perth City Library around the time he was illustrating Judge Dredd -"America" and getting the chance to see his original paintings.
Homer, Ovid and other ancient authors provide some of the Mythology I use in my work, though I also find ancient sculpture and vase paintings helpful in sourcing subject matter. The Weird Tales of H.P.Lovecraft and his contemporaries and also the Science Fiction of H.G.Wells are favourites of mine-"The Island of Dr Moreau" by Wells was a direct influence on a large painting called "Odysseus on the Island of Circe" which I finished a few years back. On Circe's Island, the companions of Odysseus were transformed into various animals by the witch, before being rescued by Odysseus. In the painting I decided to have his men in a transitional stage between man and beast, much as the creatures are in Dr Moreau.
I should also mention the movies of Ray Harryhausen, which were my first introduction to the Greek Myths when I was growing up.

3) What would be your dream job to illustrate?
This is difficult for me to answer as I pretty much get to paint what I please! I do love painting the Minotaur, however, and would happily do so many more times. 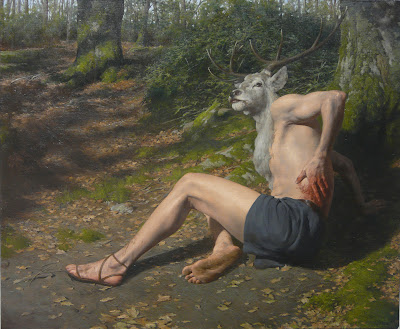 4) Tell us a bit about the illustration you've sent.
The first is "Pan"-2010, oil on canvas, 105.5cm x 70.5cm. I have him sitting by a camp fire, in the mountains, with a few of his possessions. I prefer to have him with the goats head rather than a human one with horns as it gives him a weirder look.
The second is "Actaeon"-2009, oil on canvas, 70cm x 85cm. Actaeon was a young hunter who tragically stumbled across the Virgin Goddess Artemis whilst she was bathing with her nymphs. In her fury, she transformed him into a stag and he was hunted and killed by his own dogs. This was intended as a study for a much larger piece with the dogs included. I may get around to doing it one day!

5) What can we expect to see from you next (what are you working on)?
I have an exhibition at The Scottish Gallery, Edinburgh, in August 2013 (festival show). It's another tight deadline! I'm currently painting a large Hercules for the show.

6) If you hadn't become an artist what do you think you'd have ended up doing?
I was accepted into Architecture at Heriot Watt, Edinburgh, at the same time as I applied for Art College in Dundee. I guess maybe I would've done that, though my heart would not have been in it.

7) Where can we see more of your work (web links)?
www.108fineart.com
www.scottish-gallery.co.uk
www.isisgallery.org
Twitter.com/Minotaur_man
Posted by Graeme Neil Reid at 8:00 AM