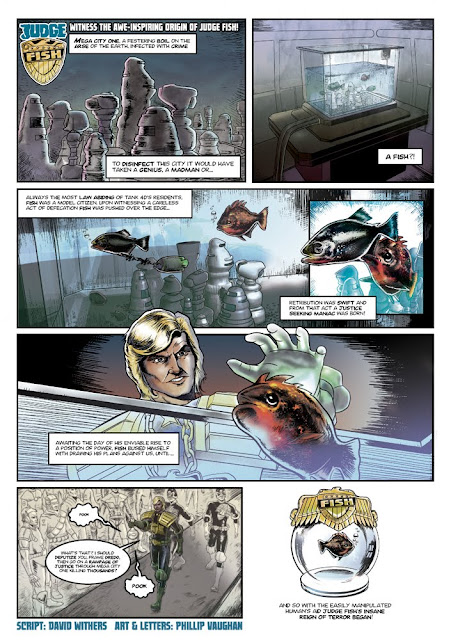 1)What was your first published work?
Professionally, it was the Full Motion Video (FMV) cutscene for the game Deathtrap Dungeon for Eidos, way back in 1998 whilst I was working as a 3D Animator at Digital Animations in Glasgow. Working at DA at that time was a great experience for me, my first job gave me great exposure to the industry and we had a quick turnaround, so it never became tired. We did lots of cutscenes for Eidos at that time. I also managed to produce quite a few storyboards for the animations, which was nice! Before that I had been published in the small press, a comic strip called Korporal Punishment(!) which I produced whilst I was at Art College in Dundee.

2)Who or what inspires you?
Growing up it would have to be fellow Dundonian Ian Kennedy's work on Dan Dare in the New Eagle. I absolutely loved his technical work on the vehicles, but also liked the consistency of the characters. Once I got a bit older and graduated to 2000ad, it was the other Kennedy, Cam, that I aspired to. His Rogue Trooper work is very under-rated, and his painted colour work is amazing! The Light and Darkness War looked great! And of course Star Wars Dark Empire!! As luck would have it, I was honoured to work with Cam at Digital Animations on a couple of projects. 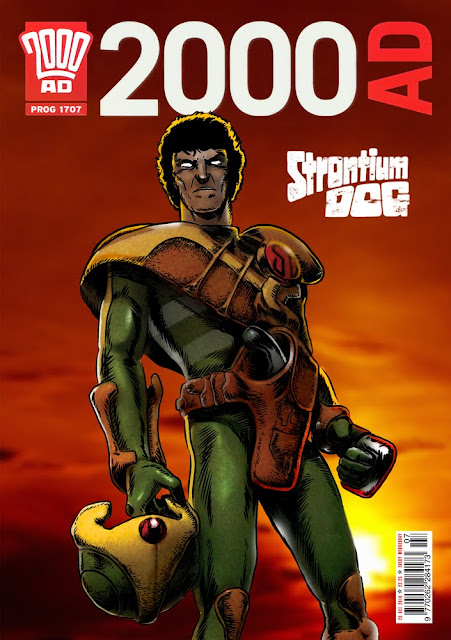 3)What would be your dream job to illustrate?
I would definitely love a crack at a Judge Dredd or Strontium Dog! I would love to illustrate a revival of 80's Eagle stalwart Doomlord, Eric Bradbury style (or maybe just bring back the photo-story, gotta love that smoking jacket Doomie!). A recent game animation commission turned out to be a bit of a dream job, but cannot talk about that until later in the year - the joys of Non Disclosure!

4) Tell us a bit about the illustrations you've sent?
The first is a commission for Zarjaz, Judge Fish written by David Withers, which is featured in the latest issue (Zarjaz 12 with a great cover by Alex Ronald!) I experimented with producing this totally digitally, modelling all the elements in 3D then digitally inking in Manga Studio. I really like the brushes in Manga Studio. I intend to invest in a Wacom Cintiq to speed up my workflow on jobs like this.

The Strontium Dog image is a cover mock up, again produced in Manga Studio and coloured in Photoshop, I'm pretty happy with the pose.

There are a couple of pages from a Dredd sample I did for a previous issue of Zarjaz. These were drawn the traditional way, then tidied up in Manga Studio and coloured in Photoshop. 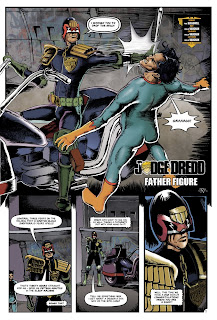 5) What can we expect to see from you next (what are you working on)?
I am currently working on another strip for Zarjaz, this time a 6 pager which will be published in the new year. I have also set up a Comic Art module at Duncan of Jordanstone College of Art & Design, www.dundee.ac.uk/djcad where I teach part-time. This will be kicking off in September. I am also working on various freelance 3D animation jobs which are at various secret stages of development ; ) 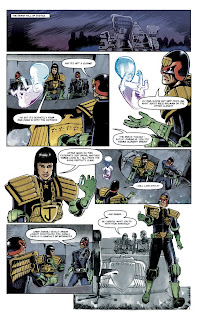 6) If you hadn't become an artist what do you think you'd have ended up doing?
When I was a kid I only ever wanted to be a comic artist or an animator, and I have been lucky enough to end up working in this field for all of my professional career… I cannot imagine doing anything else!

7) Where can we see more of your work (web links)?
www.v14.co.uk and http://twitter.com/#!/phillipbvaughan
Posted by Graeme Neil Reid at 8:00 AM