So did I mention that I was unemployed in 1993?
I think I might have done...anyway, I went to stay in London with friends for a few months, where I finished off 'LUX & ALBY", my first book. The pickings were thin, but Stewart Green was running a newly revived and hipped up version of ROY OF THE ROVERS ( a very well known Soccer comic in the UK ). My problem was that I didn't really give a rats ass about Soccer and I was incapable of faking it. So I didn't, I actually learned to like watching men run around chasing an inflated pigs bladder. I read a lot on the subject, I watched it on TV and I even went to matches. After a few months I felt I actually had a handle on the subject, I could hold a conversation on Arsenal's prospects for the season, how Hibs were looking against Hearts in the Scottish Cup Final. Then when I eventually did start drawing ROY samples....they looked fairly convincing. 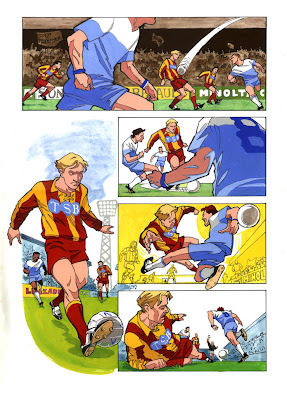 ...convincing enough to get me the job anyway. So that was a few months of paid work, culminating in me drawing an episode of the lead ROY strip , while the backup strip was drawn by the legendary Mick McMahon ( one of my very favourit comic artists EVER )
...so in short, a career defining moment for me and because ROY was published by Egmont-Fleetway, the same publisher of 2000AD/The JD Megazine, that gave me an inroad to finally getting published there.
Oh and just because I know that you're utterly fascinated by all aspects of my illustrious career ( har!) here's the earliest drawing that I know for certain that I did. Aged 5.
I dunno why I put the Discount Coupon on it, but I do remember that I couldn't read what it said at the time. 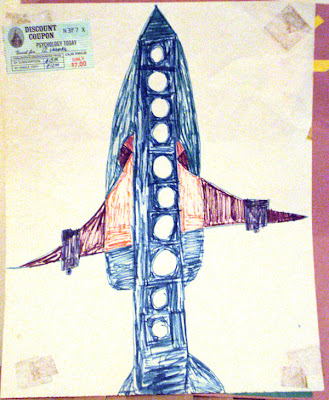 Next week I'll do something new....maybe some naked Lulu.
Posted by SiFraser at 7:27 AM