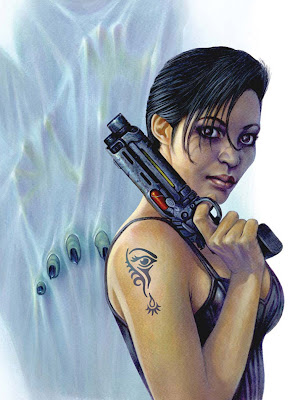 To try and briefly sum up John Higgins prolific output would take more space than Blogger allows. Lets just say that we are very happy to have John join us this Sunday and you should take a wander over to his website and just look at the list of work he's produced! Here's a great interview with the man himself which helps show the legend he most certainly is.

I don’t do as many fully painted images as I would like, and I miss it, but this is one I did of a character called Ross, part of a Trans-Dimensional detective team, her partner Frame is your typical hardboiled detective type. They are the only defense Earth have against an evil female entity called Razorjack who’s sole purpose, once she had discovered the existence of the Earth, is to breakthrough from her twisted world into our time and space, and to lay to waste all she would survey. This was the cover for the 2009 collected edition of the Razorjack Graphic novel, published by com x, a hard-boiled, SF noir story set on strange and weird worlds and between dimensions.

This image was traditionally painted using acrylic paint on water colour paper, then scanned into Photoshop, the back ground a “dimensional” veil was painted onto a separate sheet of water colour paper, this was also scanned into Photoshop. I tweaked the contrast on the gun to enhance its “weight” and also used the Dodge tool to brush up the metallic sheen on the gun, and layered the separate paintings to make the transparency of the Dimensional veil work in a subtle way against the white of the cover background.