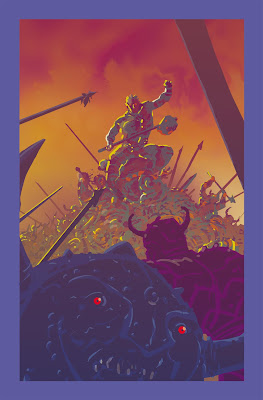 We have a brilliant contribution this week from Dominic Regan who has sent us lots to check out including six pages of his own strip.

I've been drawing comics for longer than I care to remember but I've been making money from colouring other peoples artwork for the last few years. After colouring Henry Flint in the Omega Men mini-series and I then coloured a few other bits and bobs for DC.

My own comics are apparently too strange for a “mainstream” comics audience, which I, somewhat perversely, interpret as meaning that I must be doing something right.

All the art I've put forward for consideration by Scotch Corner is from a story I'm working on called “The Devil's Pawn”, which I describe as “Stone-Age Sci-Fi”. It's primal adventure with talking gorillas, Lovecraftian aliens and high-octane psychic combat set in Africa at the dawn of humanity about 300 thousand years ago. I intend this strip to be primarily available in a digital format but if someone wants to pay me for the honour of printing it, I probably won't say no.

Great work and you can check out more of Dominic's work at his own website and his Deviant art page. Thanks for sharing Dominic! 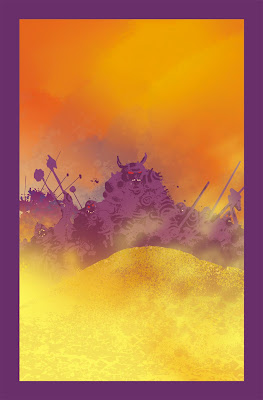