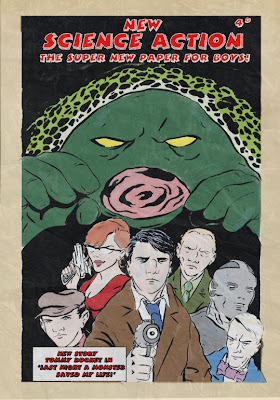 Here's a great contribution from James Corcoran whose blogsite I highly recommend, he has a great natural style and often draws characters from UK comics and TV and he posts quite regularly too!

James Corcoran was born in Scotland and has spent the last nine years living in London, he is an amateur doodler with a fondness for worlds that never quite existed. This image was done in Pentel brush pen and tinkered with in Photoshop. It features characters from a short story called "Last Night a Monster Saved My Life" currently appearing on http://james-corcoran.blogspot.com and is inspired by old British comics and JG Ballard novels. New pages appear when he can escape from his real life long enough to post them.

Thanks James, and remember that anybody can take part in Scotch Corner and become a guest contributor (yes, we mean you reading this!) so click here and take part!
Posted by Graeme Neil Reid at 8:00 AM