After last week's Knights of Pendragon post I though I would return to the second series I worked on back in 1992. Warheads was part of the Mystech line of books brought out by Marvel UK in the early 90s and featured some sterling work from fresh talents like Dougie Braithwaite, Dermot Power, Liam Sharp and Gary Frank amongst others. It was an incredibly enjoyable time creatively and we were given pretty much free reign to 'go for it' as far as the art was concerned.
Paul Neary (the senior editor at the time) saw my convention sketches and had asked me if they could form part of the new Marvel UK series of books planned. Warheads was written by Nick Vince (the Hellraiser and Nightbreed actor) My original designs and sketches were tweaked to fit in with the story and vision of the book and work began in early 1992. Unfortunately a series of family events meant that I had to leave the series (my biggest regret) and although the book continued it eventually got cancelled further down the line. I only ever drew 30 pages of this series but it remains a very personal favourite work.
I have included the original convention sketch (completed the day before the 1991 UKCAC) and character sketches (Leona, Misha and Dean, their original names) As much as I like clean and unfussy artists' work such as Hugo Pratt, Mazzuchelli and Craig Thompson... there is an 'everything and the kitchen sink' aproach that I can't resist from my love of Geof Darrow, Otomo and Moebius. Most of the artists who dismiss this bludgeoning approach appear more concerned with the hard work and effort (and lost page rate) in producing a page like this than for any artistic or stylistic reason. It is what it is. 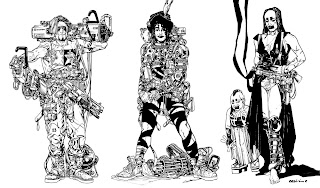 I always like the line from Se7en (later in the film when they are driving to the desert) when John Doe tells Detectives Mills and Somerset that 'Wanting people to listen, you can't just tap them on the shoulder anymore. You have to hit them with a sledgehammer, and then you'll notice you've got their strict attention.' I like that line and have it as a mantra (whenever possible) for my approach with my art. Not known for a quiet whisper, it has been a while since I last roared. Here's something to remind you... 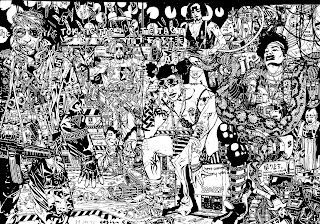