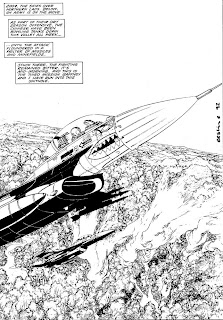 Hypersonic was a book I worked on in 1992 for Tundra Publishing and was written by Dan Abnett and Steve White. It certainly played to my creative strengths (hardware and sci-fi crap) and was great fun to work on.

The story centered around the pilot Wesley Anger and was set in a near future war scenario. Our hero is captured by a covert military team and introduced to captured alien technology that allows pilots to be 'jacked in' to the craft forming a symbiotic link with the 'living' plane providing full 360 degrees vision. The hardwiring was similar to HDMI links and USB links we have now but we only could use audio and video cables of the day (primarily SCART and coaxial although the future intentions were there)

Really enjoyed this series. Dark Horse Comics eventually picked it up and we were given a sterling colour job by the talented Dave Nestelle. The environment he created for the characters and story was astounding and the seven year delay proved beneficial for the belated release. No collections as yet but I may pester Dark Horse with some new artwork to encourage them (after the success of the Lords of Misrule release last month!)
Posted by Gary Erskine at 9:37 AM