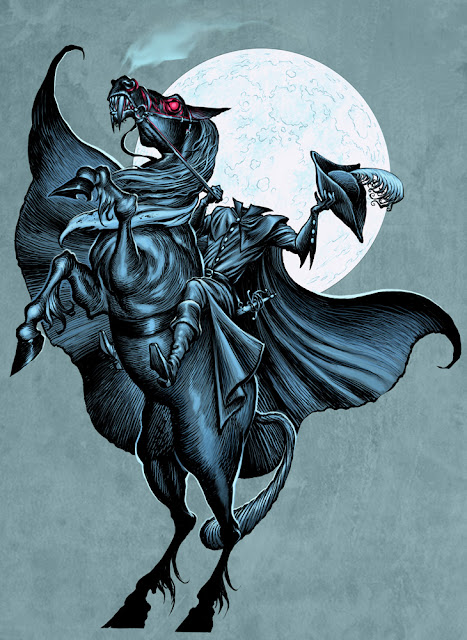 1) What was your first published work?
My first paid work was for Games Workshop on Warlock magazine. I was a mere child, and opened my first bank account with the proceeds.

2) Who or what inspires you?
This week it seems to be Edward Gorey, along with a good dose of Sidney Sime.

3) What would be your dream job to illustrate?
I'm probably working on that now, if I don't bugger it up. I'm illustrating a picture book for children, and writing and illustrating two more of my own devising, all due for release from the very kind folk at Scholastic who are helping me with the hard words. Although the writing's been much tougher and has taken me far longer than expected, creating entirely my own thing (and not just illustrating someone else's) is where it's at for me at the mo'.

4) Tell us a bit about the illustration you've sent?
It's the cover I did for The Headless Highwayman, one of four for the Grim & Grimmer books by Ian Irvine.

5) What can we expect to see from you next (what are you working on)?
More covers in a horror series called The Shadowing for Egmont (two are out already); a range of steampunk-inspired sculptures I've designed of Victorian literary characters including Sherlock Holmes, they're coming out soon; but most of all my picture books mentioned above which I'm slaving away on.

6) If you hadn't become an artist what do you think you'd have ended up doing?
Zoo keeper. Regent's Park Zoo was one of my favourite places as a child, and I wanted to be behind the scenes in green wellies. This desire only grew stronger the day me and my mum got sprayed in the face with urine by a tapir. Another time at the zoo my mum's handbag went on fire, and I like to combine these memories and imagine the tapir was heroically dousing the flames. Anyway, I've always seen myself in a pond scrubbing a reclining tapir's belly with a broom, they love that. I suppose it's not too late.

7) Where can we see more of your work (web links)?
www.martinmckenna.net will do it, although it's horribly neglected while I've been busy doing something or other. I'll update it one day soon I swear.
Posted by Graeme Neil Reid at 8:00 AM