These two pictures were created in 3D about ten years ago when I was looking for a new job. Many of the 3d art submissions I'd seen doing the rounds at the time tended to be mostly sci fi in theme for some reason. To try and stand out from the crowd, I went for the completely opposite approach. Something old. A period piece based on the depression era photography of Berenice Abbott. In the end I went for the image at the bottom right. I had better contrast than the overall grey look of the car scene. Today I think the only diffirence I'd make is to add some smoke or steam coming from the roofs or street level. It needs something to say people are alive in there.

Unfortunately these are the only versions I have of these renders. The originals, the models and the scene itself died in a hard drive failure. Don't be a tube like me, always back up folks. 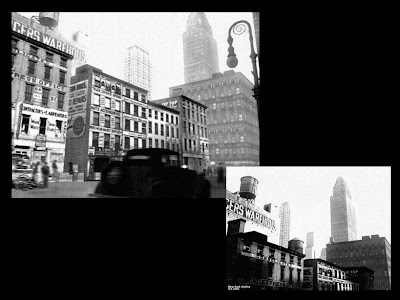