Megaverse was an idea for a new Sci Fi/humour anthology comic that some of the guys from Hope Street Studios had planned to do. Personal projects have got in the way but as far as I know it's still on the cards to do this in the near future. 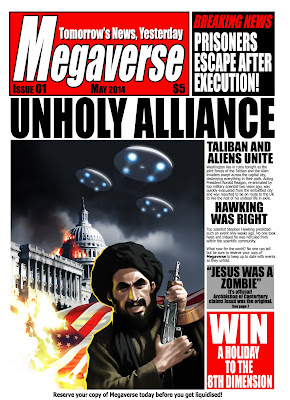 This was the cover mockup that I pitched. I wanted to do something that was very unlike a traditional first issue comic cover. Something odd that might catch your eye in a sea of super hero teams up or robotic warrior cover images. Spitting Image meets 2000ad meets the News of the World.
Posted by Alex at 8:25 AM