Many years ago , when I actually lived in Scotland, I did a big illustration job for a local band. The band called themselves 'Ambisonic' and they had produced a demo for an album called 'Ecohero' . They commissioned me to do artwork for the album and also write and draw a full colour comic CD insert detailing the history of the character Ecohero up until the start of the album's narrative ( it was a concept album. )  The band was composed of Martin Swan & Jackie Joyce , both of Mouth Music fame, though Jackie has since gone on to fame as  'Helicopter Girl'. I'm assuming that she took that name from a song on Ecohero of the same name. I did an illustration for that track, here it is... 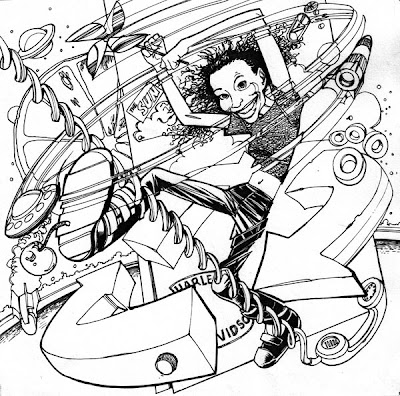