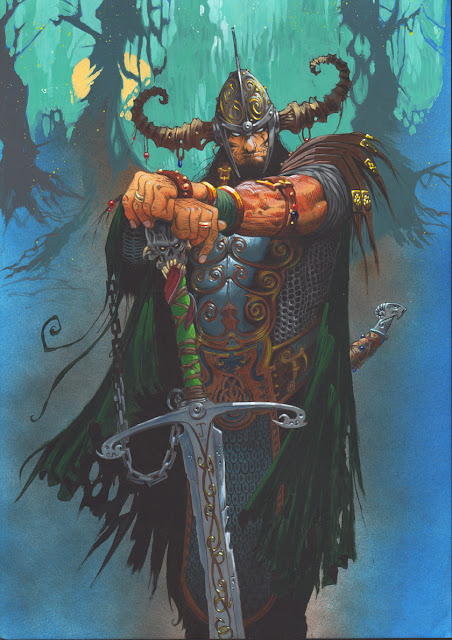 1) What was your first published work?
A story in Mighty World of Marvel (#9 if memory serves, which it does increasingly unreliably these days) - an anthology reprint published by Marvel UK. It did however have some original material, the first of the Alan Moore/Davis Captain Britain revivals I think, as well as a ‘Talent Showcase’ (or cheap filler, if you prefer) which featured my first ever attempt at a full strip, called ‘Disenchantment’, fondly remembered, if only by me. It ran for three episodes (one, maybe two, in a Savage Sword of Conan reprint, again by Marvel UK, a spin-off/cash-in on the Arnie film version of everyone’s favourite Cimmerian).

2) Who or what inspires you?
Almost everything. Artistically I’ve always been drawn to book illustrators of the Golden Age, like Arthur Rackham, William Heath Robinson and recently the shimmering, luminous work of Edmund Dulac who deserves to be a great deal more lauded than he is. The late, great Ronald Searle is always an enduring influence.  Early comic book heroes were Neal Adams, Marshall Rogers, Walt Simonson (particularly Manhunter – a pretty obscure back up feature from DC, I think). I discovered 2000AD just in time for Bolland’s Dark Judges and the Mike McMahon Slaine which for my money has the best artwork of anything, anywhere, ever. Brilliant.

3) What would be your dream job to illustrate?
Anything vaguely medieval and fantastical. If it involves drawing armour, I’m at the front of the queue. Like many, I got into Conan early, through the lure of the Frazetta covers for Ballantyne books and would love to have a go, just once, at the darker more medieval version of Conan that lurks behind my eyeballs.

4) Tell us a bit about the illustration(s) you've sent?
The Barbarian King – who am I kidding – it’s Conan, done to exorcise the glimpse I caught of the recent movie trailer.  Wrong, for me at least, on every count and very disappointing, especially as it has probably scuppered any chance of there being a decent version made in my life time. Woe. I drew this just to make myself feel a little better.

The Wizard of Wychmaze – because I’ve just finished it. It’s a character that I’ve been batting around for years and may see life somewhere, sometime. Or possibly not. There’s a great Frank Kelly Freas book cover (Martians Go Home, I think) and this is my homage/rip off. 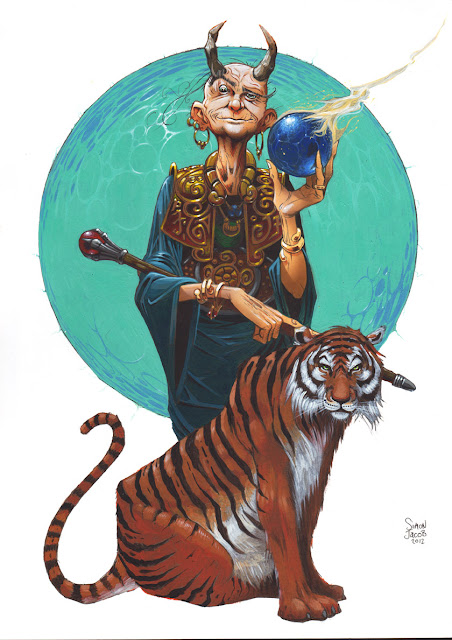 5) What can we expect to see from you next (what are you working on)?
To be confirmed but strips for sure and a great deal more writing (for comics) hopefully. I’m getting back into drawing after only recently re-uniting with my mojo. We had become separated and it was left wandering aimlessly in the Desert of Distraction for years. Until a few weeks ago, the last strip I had drawn was fifteen years ago, at which time I was still communicating with the writer by letter. By letter! With stamps and everything! It’s unbelievable how things have changed in that time but I’m really enjoying what I’m seeing out there and the possibilities of what I can do. I have a new house, a half built studio and plans to be prolific over the next few years!

6) If you hadn't become an artist what do you think you'd have ended up doing?
I sort of did end up doing it. I’ve spent the last few years working for Fender, the US based guitar manufacturer. Music and guitars were my other great passion and I’ve been lucky enough to be involved right in the thick of the business.

7) Where can we see more of your work (web links)?
There’s a bit of recent stuff here; http://shiantu.deviantart.com/
Posted by Graeme Neil Reid at 8:40 AM