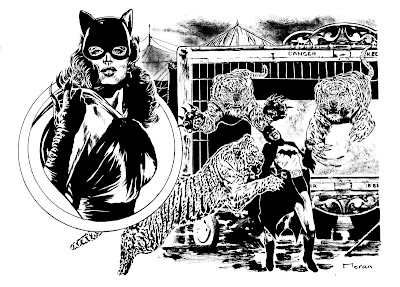 Oh boy are we in for a treat this month, please welcome Rob Moran to the Thursday post!

One of a series of illustrations from the – BATMAN: THE LOST SERIAL series; I had been watching a slew of those old film serials, THE SHADOW, THE SPIDER, THE PHANTOM, CAPTAIN MARVEL and, most of all the old BATMAN serials. They are cheesier than Quavers but I love them, Gawd help me and decided to draw up a series of drawings featuring the serial Batman but doing what the people who created the serial films never did…use Batman’s pantheon of classic villains, also done in that ‘serial’ style. This is my personal favourite – CATWOMAN; I don’t have an iota of the talent Alex Raymond had but this is the closest thing to a sexy, sophisticated Raymond femme fatale I’ve ever drawn.

An awesome start to Rob's posts, be sure to drop by his website and of course we had to ask him some questions!

What was your first published work? My first paid for published work was for a local newspaper; a series of satirical cartoon illustrations to accompany a series of articles…I was sixteen at the time. I soon found out that making satire truthful can be dangerous when I portrayed the editor as a raving alcoholic (which he was), and promptly got fired.

Who or what inspires you? My primary inspiration is my wife, Aileen; she is and always has been my biggest fan, supporter and believer in my work.

What would be your dream job to illustrate? Ooooh…I have a few; I’d love to do a huge illustrated book devoted to the stories of H. P. Lovecraft, kind of like Berni Wrightson did with Frankenstein.

I’d love to draw certain comic strips I’ve adored since childhood – the pinnacle of those being Modesty Blaise or Garth. Comic book wise; I’d like to draw Batman, The Shadow, Steranko period Nick Fury, Captain America, Daredevil or the Punisher. I would dearly love to draw an issue or two of my favourite comic book in the whole wide world – Dylan Dog.

What can he expect to see from you next (what are you working on)? Currently and for the next eighteen months or so I will be drawing the graphic novel adaptation of Shakespeare’s RICHARD III for Classical Comics; a huge undertaking but one I am very happy doing. I also have a strip to complete for an anthology of stories by writer Paul N. Neal, alongside the likes of Glen Fabry, Steve Pugh and John McCrea. Plus I am lined up to illustrate a book based on The Saint character with writer Mark Ellis for Moonstone Books.

If you hadn't become an artist what do you think you'd have ended up doing? Hmm…I’d like to think I’d have been either a physicist or an opera singer but more likely I’d have ended up as a serial killer or some other kind of psychotic criminal.
Posted by Graeme Neil Reid at 8:00 AM