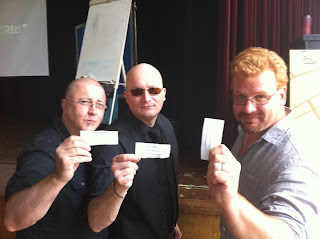 Outside my comic and film work, I also do teaching.

Last weekend I was in Romford, Essex for the Hollywood 2 Havering event. Myself and talented Disney artist Alan Batson hosted some workshops for the local school kids (and parents) with the congenial Huw J Davies keeping our house in order. We ran four classes a day with Alan and I alternating our roles (host and helper) We chatted to the crowd, did a Q&A and also showed the audience how to draw Captain America and various Disney characters. Good response from everyone who turned up and a very high level of entries at the end of each class for the artwork and prize giveaways. Photos can be seen here.

The event was set up by Russell Singler (owner of Art You Grew Up With) and was an extension of the classes he already runs through the store with Huw J. Terry Jervis (Jervis Media) who helped organise the whole Havering 2 Havering event and ensured a good day out for everyone. There were a great selection of classic movie cars, Film and television panels, live bands, BBQ and many other treats. My own personal highlight of the weekend was a small drive in Steve MacQueen's Ford Mustang from Bullitt (in the passanger seat) Alan got to drive the car himself, lucky man!

A wonderful event. Many thanks to Alan Batson, Huw J, Russell Singler and Terry Jervis who helped make the weekend a very memorable one.
Posted by Gary Erskine at 9:11 AM