So after 2 weeks of preamble and character designs, here are some actual pages of artwork. These are the only pages that were ever coloured. In point of fact these are the 2nd or sometimes 3rd versions of these particular pages ( I forget and there were multiple panel changes, recolourings etc .)
Normally on 2000AD I draw a page , it's coloured, I get paid and then it sees print. Nice and simple, there's rarely even much feedback, which is fine I appreciate being trusted to just do my job and I suspect that Tharg has better things to do than nursemaid emotionally needy/lonely creative types. Many ( maybe most ) publishers are not like this however, they expect to have input into the creative process. This can sometimes be fruitful and helpful, but in other cases it can be utterly maddening. The fact that I quit this job might give you some idea where it sits in my memory. 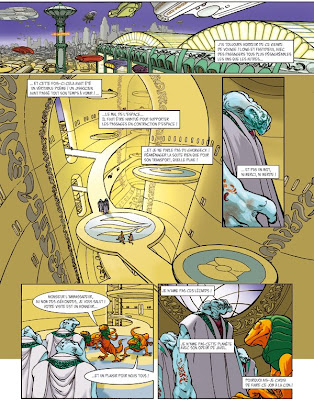 This is in no way intended as a criticism of the 2 other creatives involved in this process however. Both Eric Stoffel and Herve Richez bent over backwards to make this project a success. Now that I look at the pages themselves, I can see that it looked pretty good and all the critical feedback I got was solid and constructive. So I am left with the sad reality that I am probably entirely to blame for screwing it up. 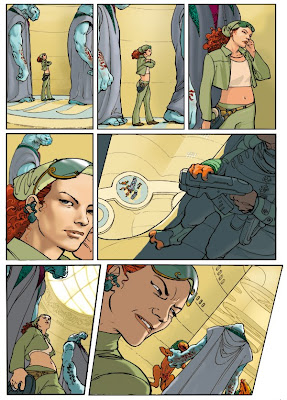 Whether it was through poor communication on my part ( trying to work in another language was much harder than I had expected ) or unrealistic expectations. Then there was the fact that by that time I'd been living in Africa for 7 years, had just had a kid and was certainly not in the right frame of mind to be working on a project like this. 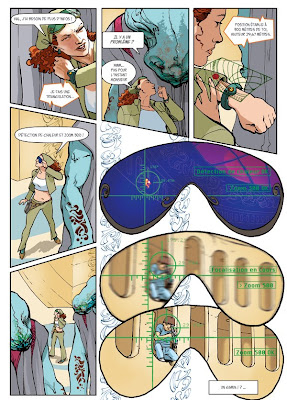 Whatever happened, I got depressed, my output dropped to a trickle and I found that nearly a year had gone by and all I had done were 8 pages. Subconsciously or consciously I hadn't taken any money from the publisher during that time , perhaps with the feeling that if I needed to bail out then it would be easier if I didn't have to pay any money back. Perhaps by doing that I had let myself think about dropping Axelle and thusly had given myself permission to do so. 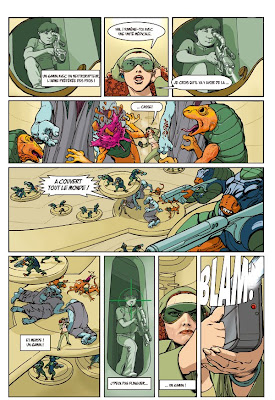 In any event, if you look at this and look at my current Dante work, you'll see that a lot of what I learned on Axelle was transferred to Dante. So even if nothing concrete was ever made of this project , it lives on in my skillset.
Freelancing is hard.
Posted by SiFraser at 8:04 PM