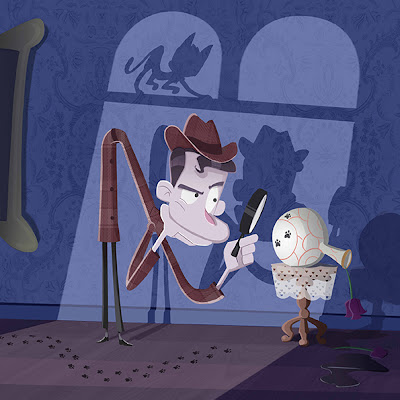 1) What was your first published work?
The first work I ever did was a 12 page mini comic called ‘Anthony’ for Daniel Clifford and Gary Baindbridge’s ‘Sugar Glider’. I’d never had a real crack at illustrating a comic before, but at the time I was at college studying animation so I had some idea of visual storytelling. But I suppose the first real published work is Halcyon and Tenderfoot, which is an all-ages, four issue superhero comic Daniel and I self-published in 2012 after setting up Art Heroes. 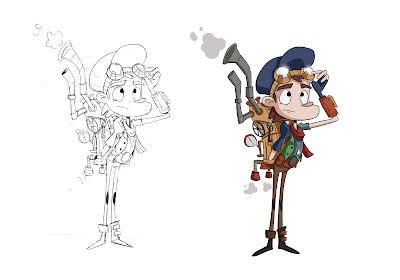 2) Who or what inspires you?
A nice, long walk with my dog normally works these days.
It’s changed drastically as I’ve gotten older, but when I first really started getting into drawing, it was cartoons and not comics which inspired me. I’d hurry home from school to watch Dragonball Z on Cartoon Network, and then draw the characters endlessly. So for a long time it was mainly manga and anime that I looked at. That changed when I started posting on an online drawing forum called drawingboard.org, which really opened my eyes to different styles, techniques, and artists who were miles and miles ahead of me. Mick Harrison and Stephen Silver were two in particular who helped me massively and are still an inspiration today. Mick is god-like in his abilities but always had time to show me where I was going wrong and break things down for me. He still helps me out today, and whenever I’m drawing, the things he taught me about silhouette, shape, posture and readability are always at the forefront of my mind. Stephen was the character designer for ‘Kim Possible’. That simplicity which works for character design in animation is something I try to carry over into my comic work. A little saying that usually keeps me sane when it’s gone belly up is - ‘You’re in control of the drawing, not the other way around’.
Comics-wise, I can get inspired by just about anything. I’ve recently read ‘Nao of Brown’ which is fantastic, but I find Calvin and Hobbes just as appealing. I suppose the fact that there are so many fantastic artists out there is what really inspires me. If Jonny from down the road is working harder than me, then he’s more likely to get the gig than I am. 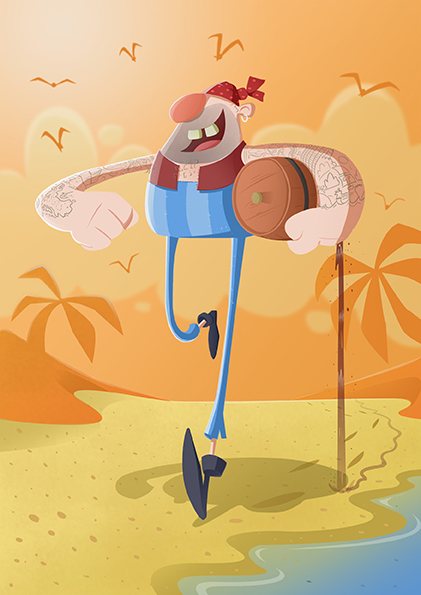 3) What would be your dream job to illustrate?
Daniel and I have a couple of great projects in the Art Heroes pipeline which I honestly think are perfect for me to draw. Daniel knows my strengths and weaknesses and writes stories around that, which is fantastic for me!
If I was doing a superhero book, I’d like to have a crack at Robin/Teen Titans.
I really think if you’re working on your own stories, then that should be your dream job, and if it isn’t, then do something else! 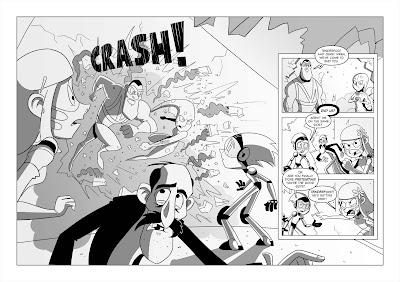 4) Tell us a bit about the illustration(s) you've sent?
a) Detective: If I’m working on standalone illustrations, then I try to stylise everything far more than I would with my comic work. I still attempt to tell a story, though. I never try to achieve realism in my work, but I do try to achieve believability. I probably couldn’t have made this fella anymore stylised without him looking too silly. He might do already!
b) Steampunk boy: It can often be hard to keep that energy and zip you have in your pencils when you begin to ink and colour, but this lad turned out okay. The idea here was to draw the viewer’s eye by using less detail around his face, which would be a contrast his OTT costume. Not sure if it works, but that was the plan!
c) Pirate: For my illustration work, I tend not to have any line work. This makes a nice change of pace from inking comics! It can also be easier on the eyes for a younger audience. This obviously isn’t always the case, though.
d) H&T: A double page spread from Halcyon and Tenderfoot #4.
e) H&T: This is one of my favourite pages from Halcyon and Tenderfoot. I can feel the Dragonball Z influence!
f) H&T: This is a colour sample for the Halcyon and Tenderfoot pitch we’re putting together. Line work by me, colours by the super talented Nathan Ashworth.
g) H&T: Again, another colour sample for the pitch. 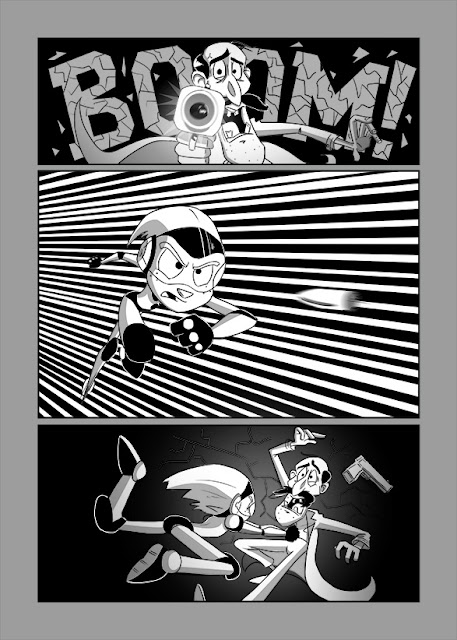 5) What can we expect to see from you next (what are you working on)?
We’re working on some cool all-age projects at the moment. Some of these are our own stories to pitch to publications, while others are licensed work which we’ve been lucky enough to get a chance to work on.
The next big project will hopefully begin to take shape in the next few months. I’m super excited to get started on it. The story will follow a young girl as she tries to track down her father’s stolen invention. We think it’ll be a winner, but we would think that, wouldn’t we! I guess we’ll have to wait and see. 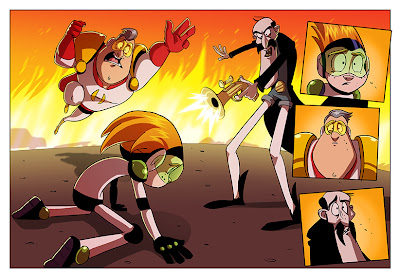 6) If you hadn't become an artist what do you think you'd have ended up doing?
Probably a teacher or a nurse. I’ve never been afraid to get my hands dirty, and I’ve done some weird and wonderful jobs in the summer and winter months to make some money. I’ve plucked turkeys, delivered the yellow pages, cleaned drains, dry stone walling, farm labourer, fencer, barman, worked on a racecourse and all the rest! I was never particularly good at any of them, but at least it was experience. 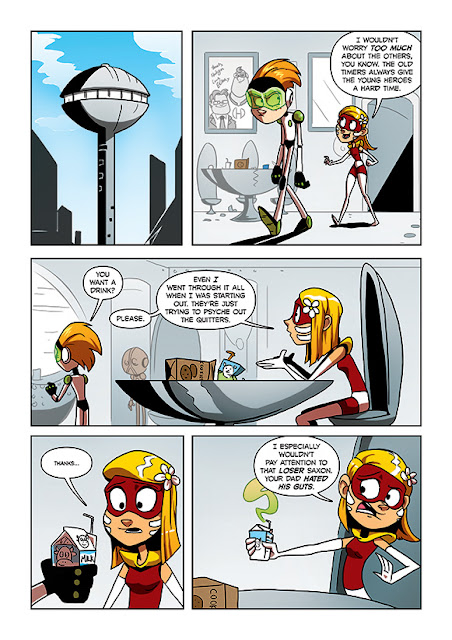 7) Where can we see more of your work (web links)?
My personal blog is www.leerobinsondraws.co.uk and the Art Heroes site is www.artheroes.co.uk
Posted by Graeme Neil Reid at 8:00 AM