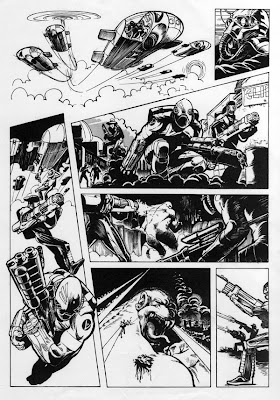 I left college in 1991, I got a couple of jobs from my degree show and I'd been doing smallpress for a while, so I pretty much assumed that I would walk straight into a cool job and be set for life.....

So I sat there with the dawning realisation that I would need to eat and that having spent my Dole check on artbooks I might not be able to afford to do that.

Then I started working on my portfolio. At the time I hadn't really settled on any particular style, I could draw one way one week then totally differently the next. The page at the top was supposed to be some sort of ABC Warriors deal, a band of plucky mechs taking on a big bad monster. Very tight, lots of blacks. Then I did this, 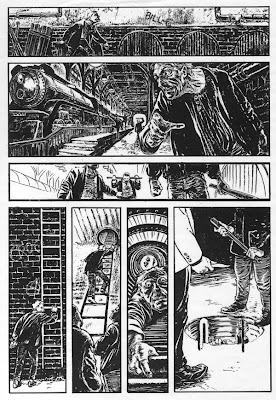 All kinda grungy, drawn of textured watercolour paper and inked with a drybrush.
The I was a big fan of Film Noir and Orson Welles and Rita Hayworth. 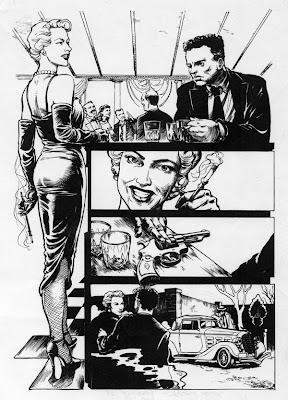 Up to this point I had never attempted to do full colour artwork. So when I heard that there might be some work on Roy of the Rovers for full colour art vaguely in the style of the then lead artist Rob Davis.

So my attempt to do that will be next weeks episode.....
Posted by SiFraser at 8:54 AM