So there I was, it was 1993 and I'm absolutely finished with my first book 'Lux & Alby: Sign-On & Save the Universe' , the issues had come out and the offers of work that I was SURE would start pouring in ...hadn't. So faced with the stark reality of utter brokeitude and slow starvation I had to get practical. So I drew some samples... 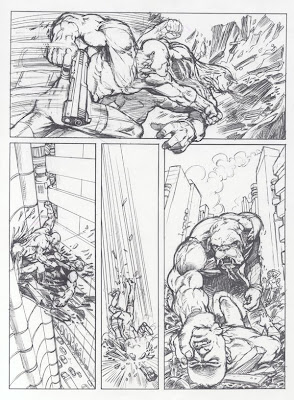 Lots of comics at that time seemed to involve large men hitting each other, so I picked up a copy of Frank Miller and Walt Simonson's ROBOCOP vs TERMINATOR and I taught myself how to draw that. 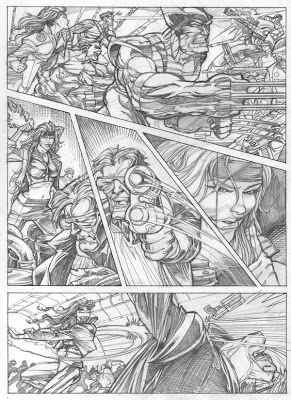 Back in those days there was a comic called the X-MEN ( do they still publish that? ) which was REALLY popular. Now 'REALLY popular' usually means MONEY, right? I wanted money...oh yes. 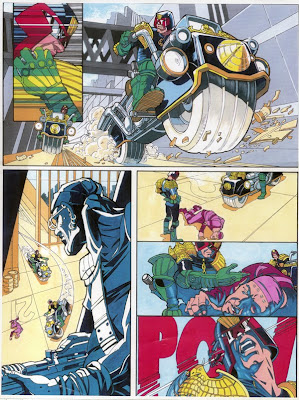 Then there was this comic called 'The Judge Dredd Megazine' , which a friend of mine worked on. They seemed to be hiring like crazy back then, they had all kinds of crazy stuff in there, so I did some samples for that. As it happened that worked out quite well and I got my first SHIMURA job from those samples, which led to me meeting a fellow called Robbie Morrison. That's another story though. 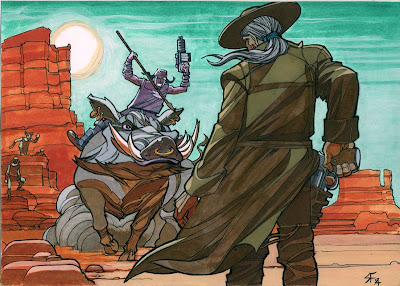 I also knew this guy called Gordon Rennie who at that time was writing a comic called MISSIONARY MAN. The artist on that was a loser called Frank Quitely ( yea that's what he called himself, can you believe that? ) so I thought I could do better, naturally. Nothing much came of that, but I quite like this pic.
(Dunno what happened to that Quitely guy)
Posted by SiFraser at 6:54 PM