On Tuesday last week I was asked by editor Jim Wilson of the Sunday Mail to contribute a cover for the Sunday Mail. He wanted an inspiring image of Andy Murray before the Wimbledon final. Of course, he still had the quarter and semi-finals to win but that was a sure thing, wasn't it? I called my colourist Yel Zamor and explained the opportunity we had for some seriously national [Scottish] mainstream exposure!

Well, the Wednesday quarter final proved a close and bitterly fought game to the end with Andy just winning in the last game. Were we going to be paid if he lost? It was best not to think about that. The London Film and Comic Con loomed ever closer and we had a Friday morning deadline. I woul dbe at the event from ten that morning with little access to internet to do any corrections.

There were two sketched versions. Both made reference to Superman and in particular, Alex Ross' classic imagery [including his homage to Joe Schuster's classic cover] I preferred the aerial shot of Andy Murray serving over Wimbledon but Jim went for the Saltire reveal, and I understand why. It was ALL about Andy and we needed to focus on that.

Below are some of the images and sketches for the piece. Yel Zamor did a wonderful colouring job [as always] considering the win/lose nature of Andy's games till the final. In the end the Sunday Mail ran with our cover and also made a double-page spread of the image as a pull out poster. We heard of fans posting them up on walls and fridges on the Sunday Finals Day! It was a real treat to work on the cover and the 285, 000 circulation [even seen in London City airport on my return from LFCC] was better than most comics. 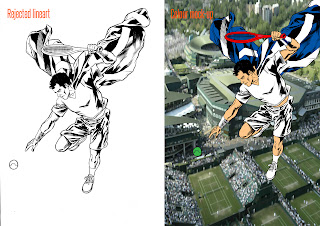 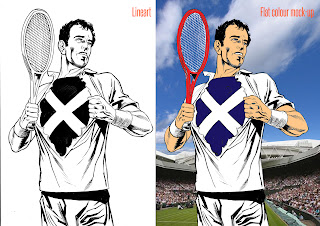 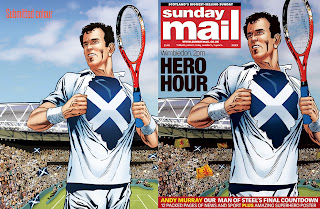