Here's a fun commission from the rock music magazine of choice, Kerrang! The regular feature 'Introducing' by Katie Parsons asked me to add a bit of life (and a giant octopus) to some stock shots they'd received for French-Canadian band 'Skip the Foreplay'. The brief really was: "We would like a giant octopus coming down from above with its tentacles wrapping around members of the band." Cool, can do! 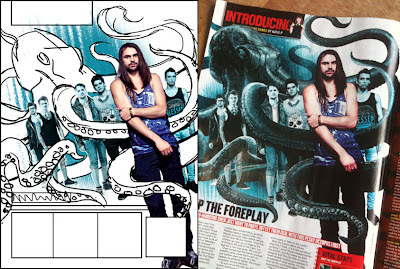 I was supplied three different shots of the band (I'd love to credit the bands photographer but I've no idea who it was and I don't think Kerrang! knew either having had them supplied by the bands PR) and I quickly worked up a design using these and playing to the layout of the feature. My many years of working in advertising and design has seen me do a lot of work 'photoshopping' images and so working with the photographs was no new thing for me but a lot of fun to add in my illustration of the deep sea leviathan into that mix.
Posted by Graeme Neil Reid at 8:00 AM