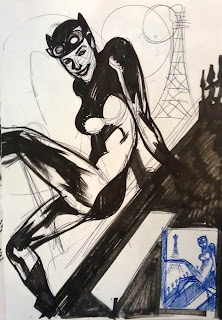 I normally don't like showing the 'process' as some of the early sketches always look so very rough and, well... bad. These failed attempts at something better always get hidden in a drawer or trashed. The reason? Well, I constantly change poses, elements and rendering while I draw and these initial ideas never show the full potential. More so when shown out of context of the finished image.

This sketch of Catwoman (part of two ideas I worked up for Paris Manga) has a Parisian flavour about it and still pleases, even at this raw stage. There is a suggestion of a short story too which also helps. Compositionally though it is nearly there. Some nice angles and shapes created by her legs, back and the buildings!

I normally start with a little thumbnail (seen bottom right) and use that as reference for larger sketch. Ideas are added, changed and occasionally overdrawn. There was a proper inked pass done of this pose at an event but I forgot to take a picture of it, sadly. The legs were slightly different and she was more recessed into the window frame (allowing for some rather complimentary underlighting of her quite lovely bottom) The pose was also more arched and curvier all round.

The second idea from this series was of Catwoman at the Folies Bergere and was rather saucy. Possibly working that up into to a print for next year's Paris Manga show. A sketch might be posted before then.
Posted by Gary Erskine at 10:38 AM