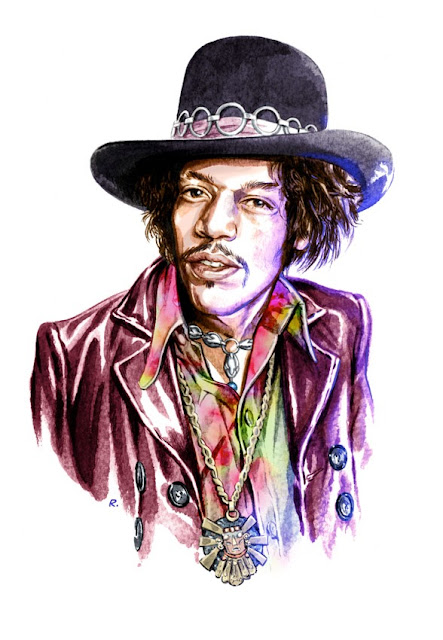 Loved Jimi Hendrix's music since I was a teenager and first heard 'Are You Experienced'. I've known a basic history of the man but never looked into who he was in any great way. The BBC series Imagine showed the docu-film 'Hear My Train A Comin' the other week and it was pleasing to see that the man came across as a genuinely nice guy. I liked his attitude to life and one piece of footage showed him being interviewed on TV for the Dick Cavett Show, he was asked about fame and what kind of compliments he liked to hear about himself, his response sums him up:

I don't really live on compliments. As a matter of fact, they have a way of distracting me. I know a whole lot of musicians, artists out there who hears the compliments and thinks "wow, I must have been really great" and so they get fat and satisfied and they get lost and forget about their actual talent and start living in another world.

This was painted on watercolour paper in black wash and then I added colour in Photoshop, felt good to do a little tribute to a great person.
Posted by Graeme Neil Reid at 5:35 PM